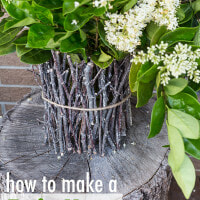 Last week I shared that we removed holly bushes from the front of the house. These shrubs were big and went to the landfill or were burned. Over the weekend, Ed trimmed back more shrubs and flowering plants around the yard and when I saw cut branches with little white flowers on the ground, I immediately scooped them up knowing they would look great in a vase.

I placed them on the deck in a vase I had, but the vase looked out of place… too formal for the woodsy feel of the lake side of my house.

I then remembered that I once made a rustic twig vase and decided to do it again and went to gather more twigs from my yard to make a vase that would be more fitting for my deck and the tree trunk side table. My yard is framed by trees so finding twigs to use was easy.

I am not sure what shrub these white flowering clippings is called, but we have a lot of it. Once it is finished blooming, I will keep the twig vase filled with other flowering clippings from shrubs around my yard and then pretty soon, my hydrangeas will be blooming and I can fill the vase with pink hydrangeas.  They are my absolute favorite flower and I can never have enough. I wish they would bloom all year. Wouldn’t that be nice?

How to Make a Rustic Twig Vase

This is a very easy project that can be done in no time. If you don’t have a woodland path or yard to collect twigs, you can buy pre-packaged twigs from the craft store.

2. Using that twig as a guide, trim the rest of the sticks so that they are of uniform length, removing any lateral branches or stubs.

3. Use Glue Dots or hot glie, to apply a line of glue from the bottom to the top of the vase. Place a twig on the glue so that it’s secure and positioned vertically on the vase, with the bottom end flush with the base of the vase and the other end even at the top.

4. Repeat with each twig, working your way around the vase until you have covered it completely. You can also use a rubber band around the middle of the vase to hold the twigs in place and insert twigs one by one so that they are neatly lined up and fully covering the vase.

5. Cut a piece of twine long enough to tie around the vase. Wrap it around the center of the vase (covering the rubber band if you have used one), and secure with a knot or a bow. I only wrapped the twine around once, but you can go around the twigs a few times to create a slightly different look to the vase.

All done. Now I can showcase clippings and flowers on my deck all summer long in rustic woodsy style.

Sharing this DIY Twig Vase over at Tip Me Tuesday