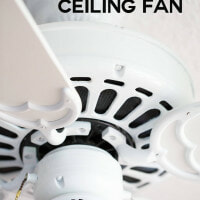 If you have dark and dated ceiling fans in your home that you don’t like and can’t afford to replace them, why not paint them? I did and I didn’t even have to take them down. This post will show you how I painted them.

As you know I am trying to update and add my own style to my house.  I am DIYing through many projects throughout the house. Many are cosmetic updates, others larger and more complex projects. One of the smaller cosmetic updates I have been doing is accessing the ceiling fans.

Here in the south…ceiling fans are a necessity, especially if you don’t want to run the AC all the time. I like to have the windows open to get that fresh air feeling and turn off the AC when it is not super hot and humid. It is on these days that the ceiling fans are a blessing. 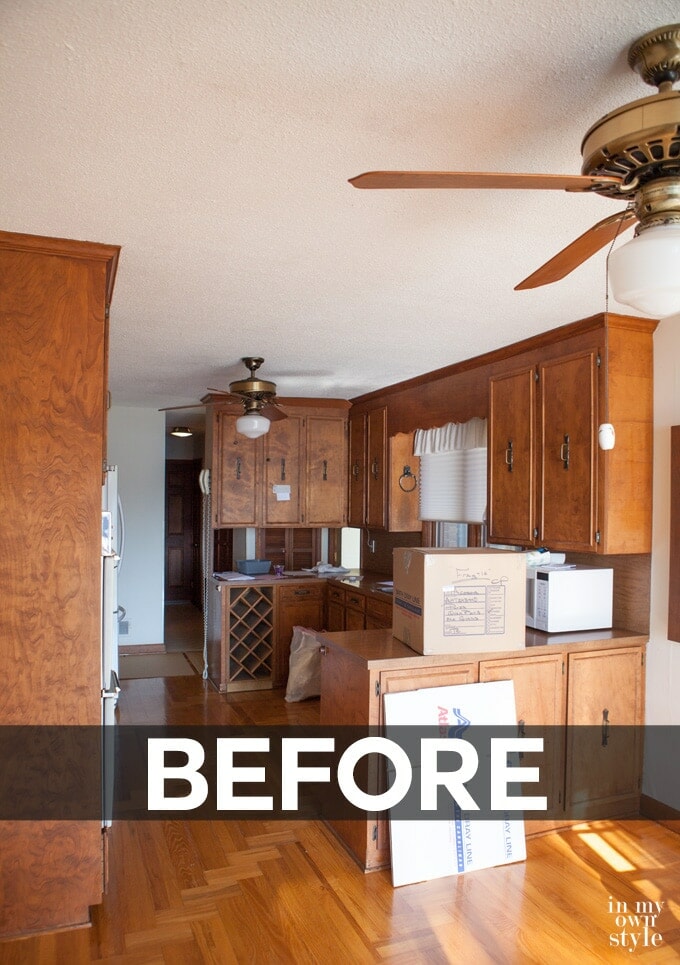 There are 10 ceiling fans in my house. 8 are made by Casablanca, the other two are made by Hunter. Both Ed and I agree that the Casablanca fans work better, they spin faster and really do cool the room off.  I do not want to replace these, since as a few of you told me, they just don’t make the fans like they use to and that I should keep the good ones.

A reader has told me that fans with angled blades do produce more air than fans with flat mounted blades.  I think this is the case for the fans in my house.  The 2 Hunter fans have flat blades.

I do want to paint the keepers white so they will look more seamless with the white ceiling. Right now since they are dark brown and antique gold your eye goes right to them. I want them to disappear. I can make that kind of happen by painting them the same color as the ceiling.

How Do you Paint a Ceiling Fan Without Taking it Down?

So how do you paint a ceiling fan?  There are a few ways, but I took the easiest path. You can remove the fan from the ceiling and take it outside to spray paint or you can do what I did. 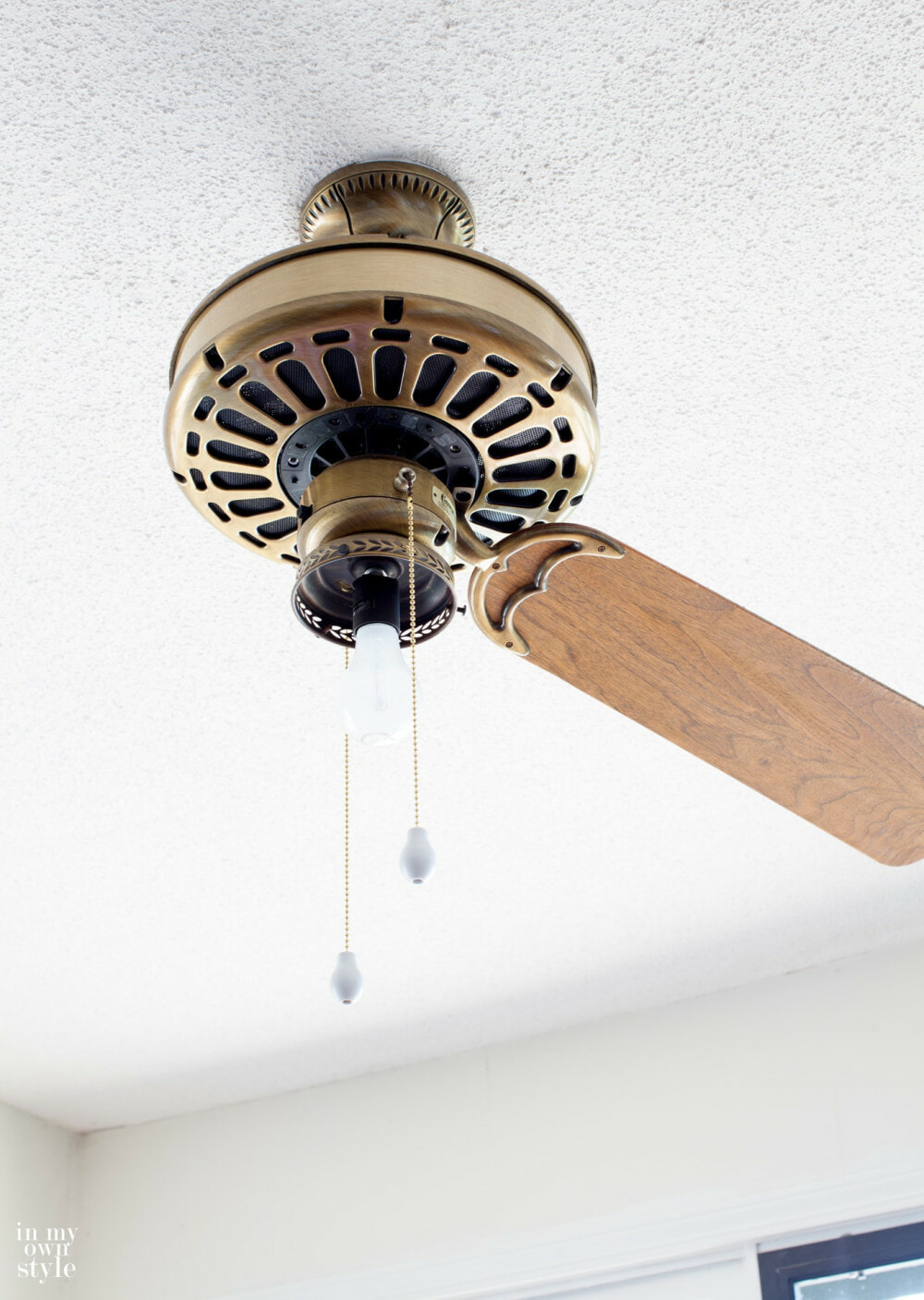 I left the main part of the fan in place and just removed the blades.

Doing it this way, I could paint the fan by myself. No electrical knowledge or re-wiring needed. All I had to do it turn the fan off and turn off the electrical panel breaker while I was working on it.

I originally was going to remove all the bolts around the cover so I could remove the cover and spray paint that also, but it proved way too hard. They wouldn’t budge. 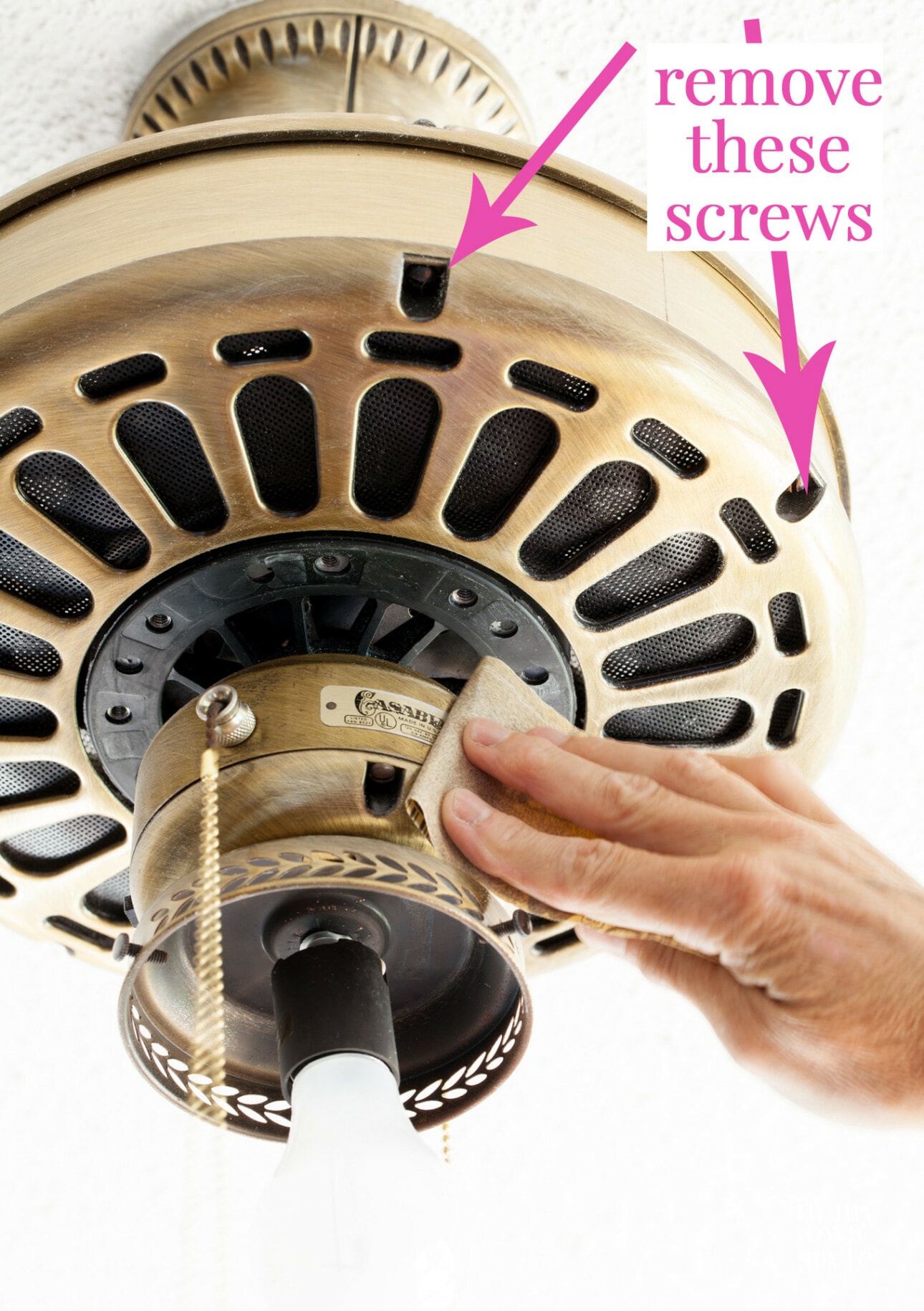 If the bolts on your fan are easy to remove, then remove the grill cover and spray paint it along with the blades. 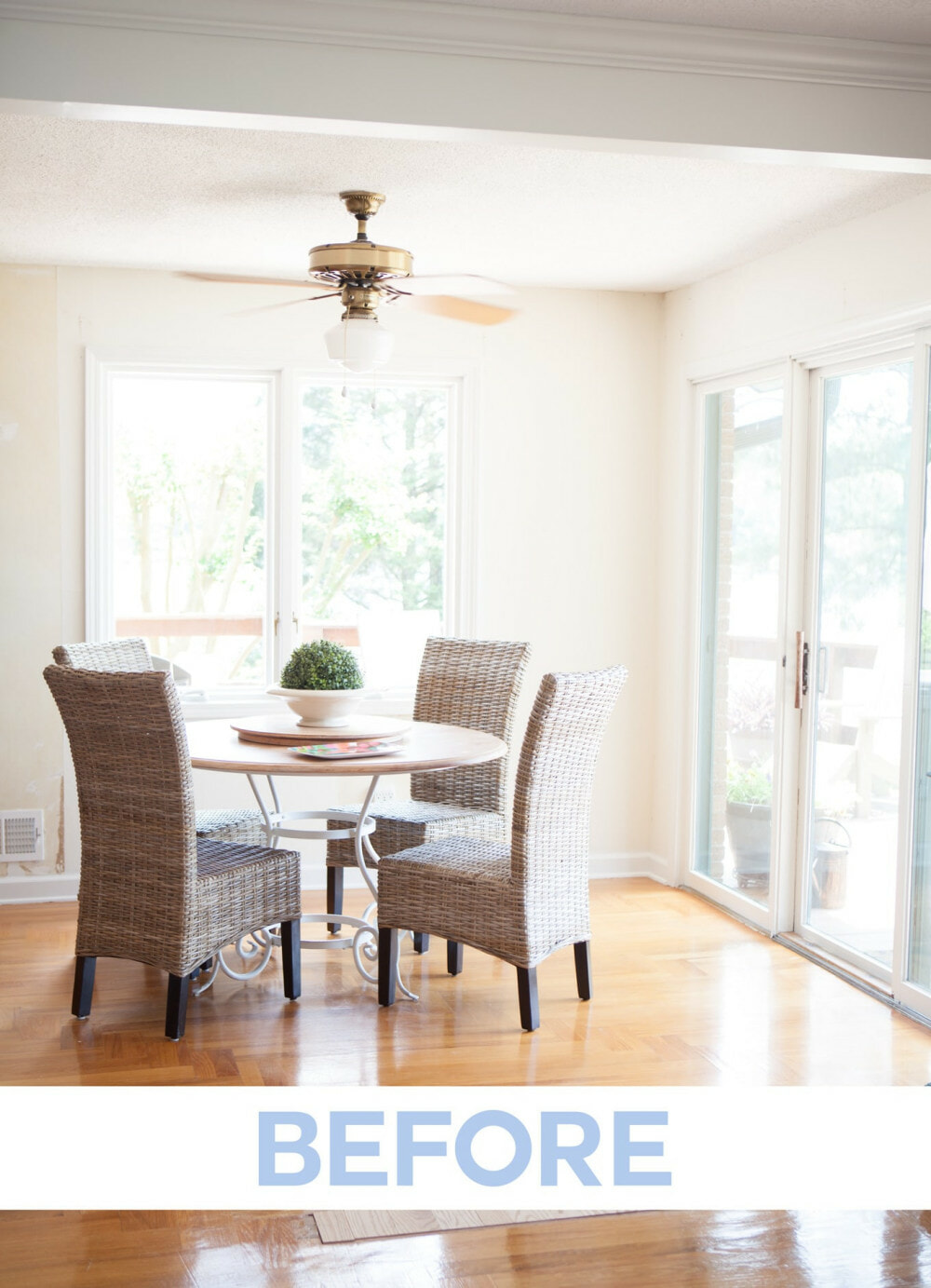 Your eye goes right to the dark stain and color of the fan. 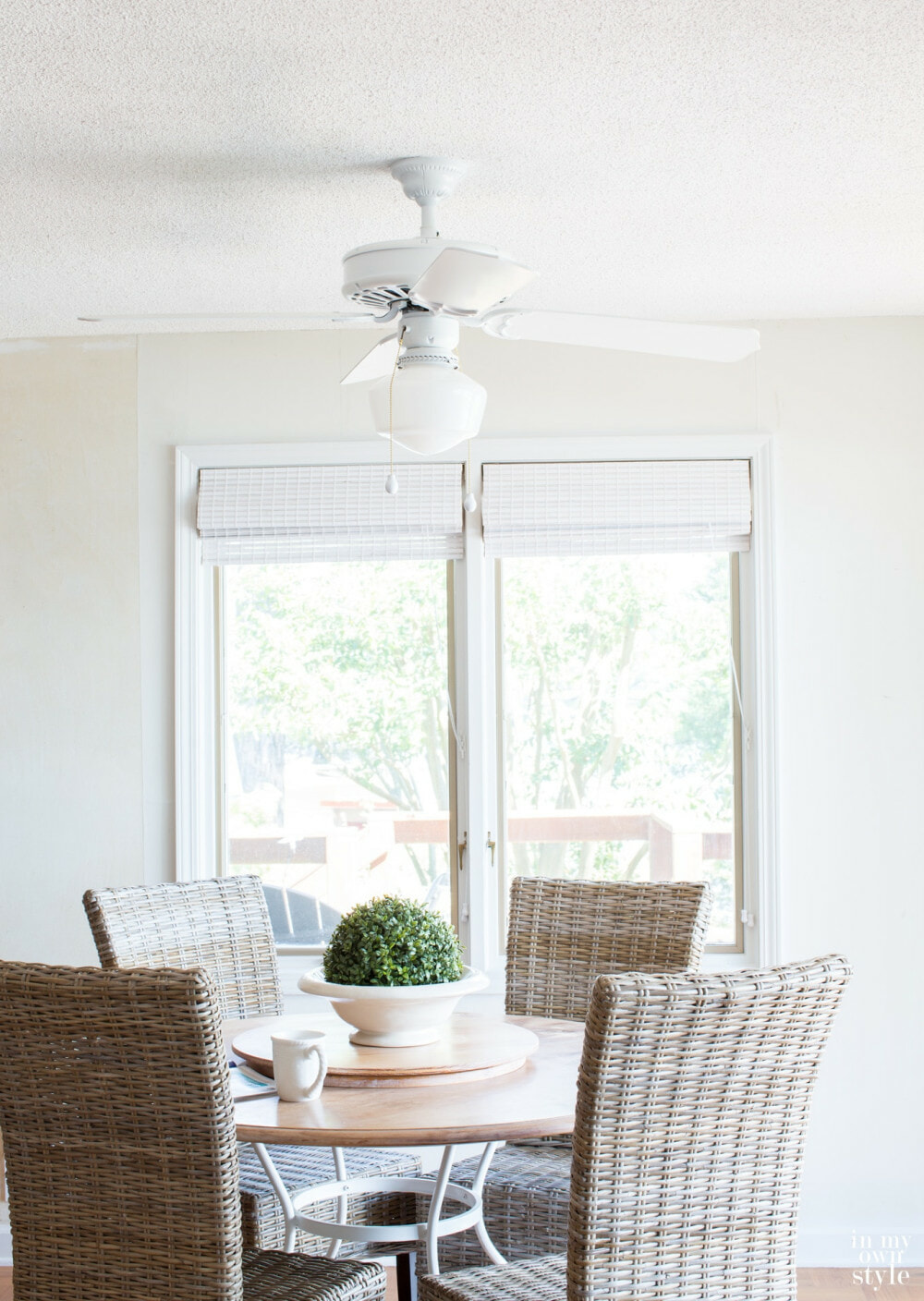 Ahhhh…much better. No more big brown spiders on the ceiling :-)  Nice white ceiling fans that still do the job, but blend in and don’t look like an eyesore. 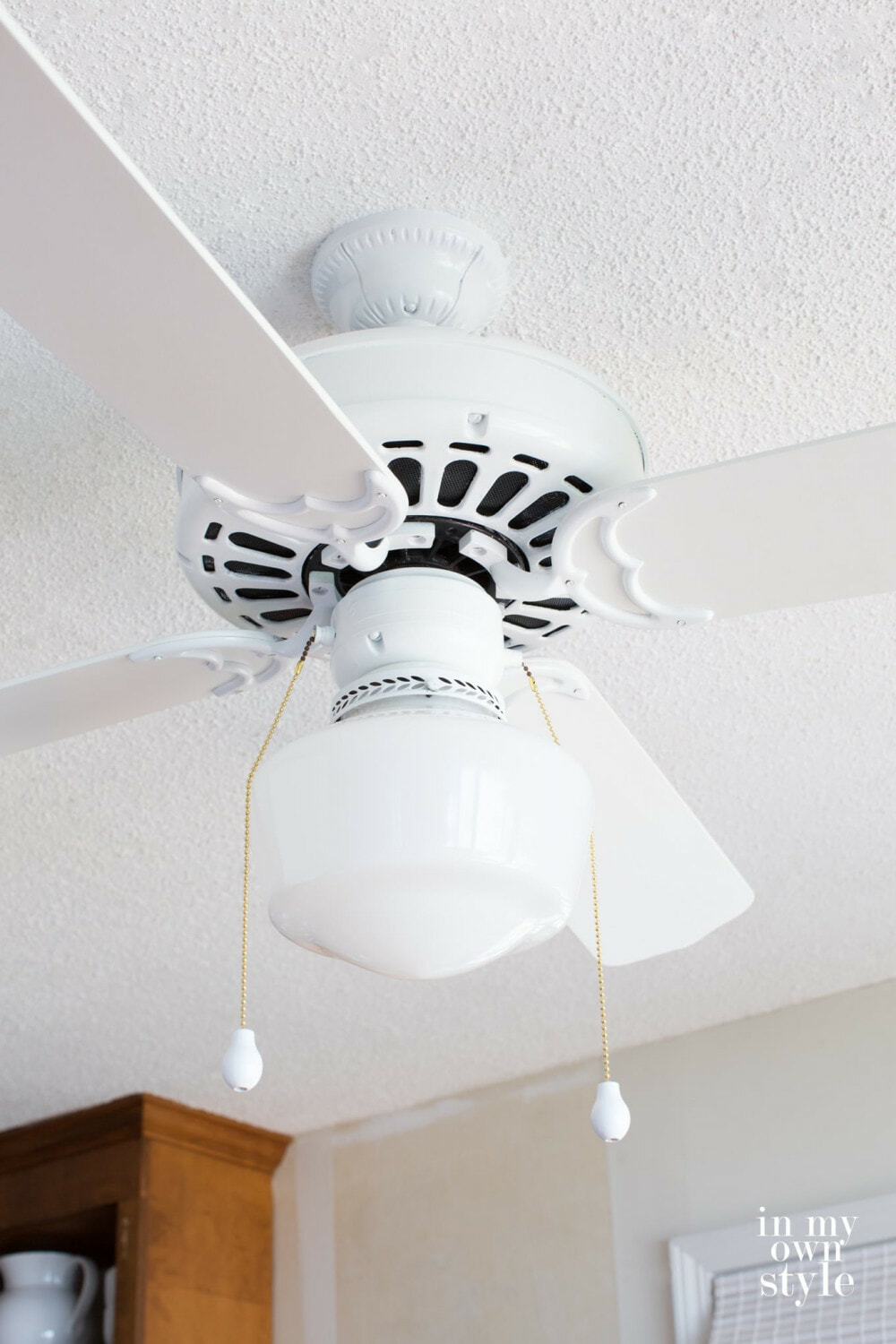 What Type of Paint to Use to Paint a Ceiling Fan?

I used 3 different types and brands of paint to paint the ceiling fans that would create different sheens. I did this so they would look like they came from the factory with shiny and flat finished surfaces. If I had used the same paint, they would have lost some interest in the details. 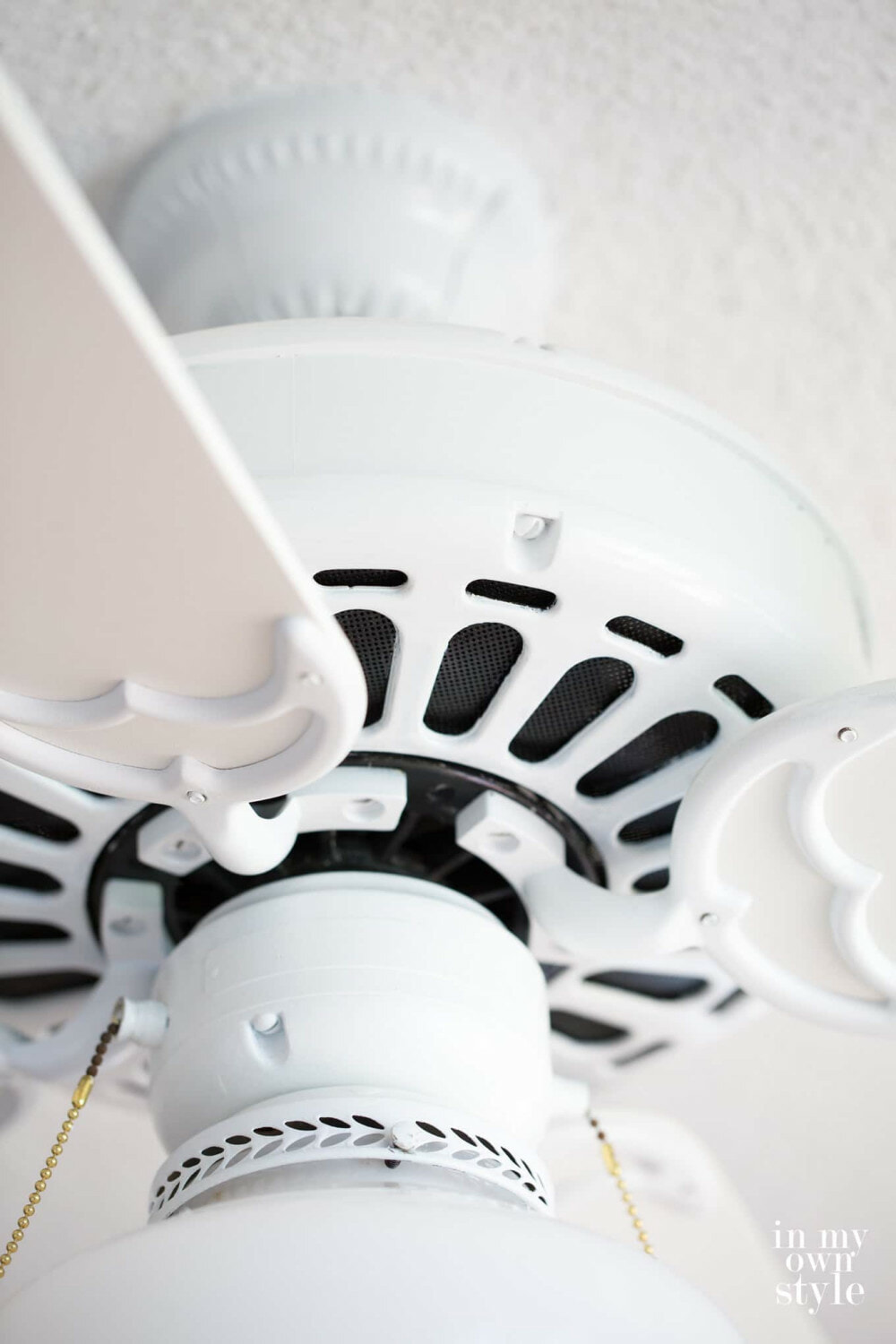 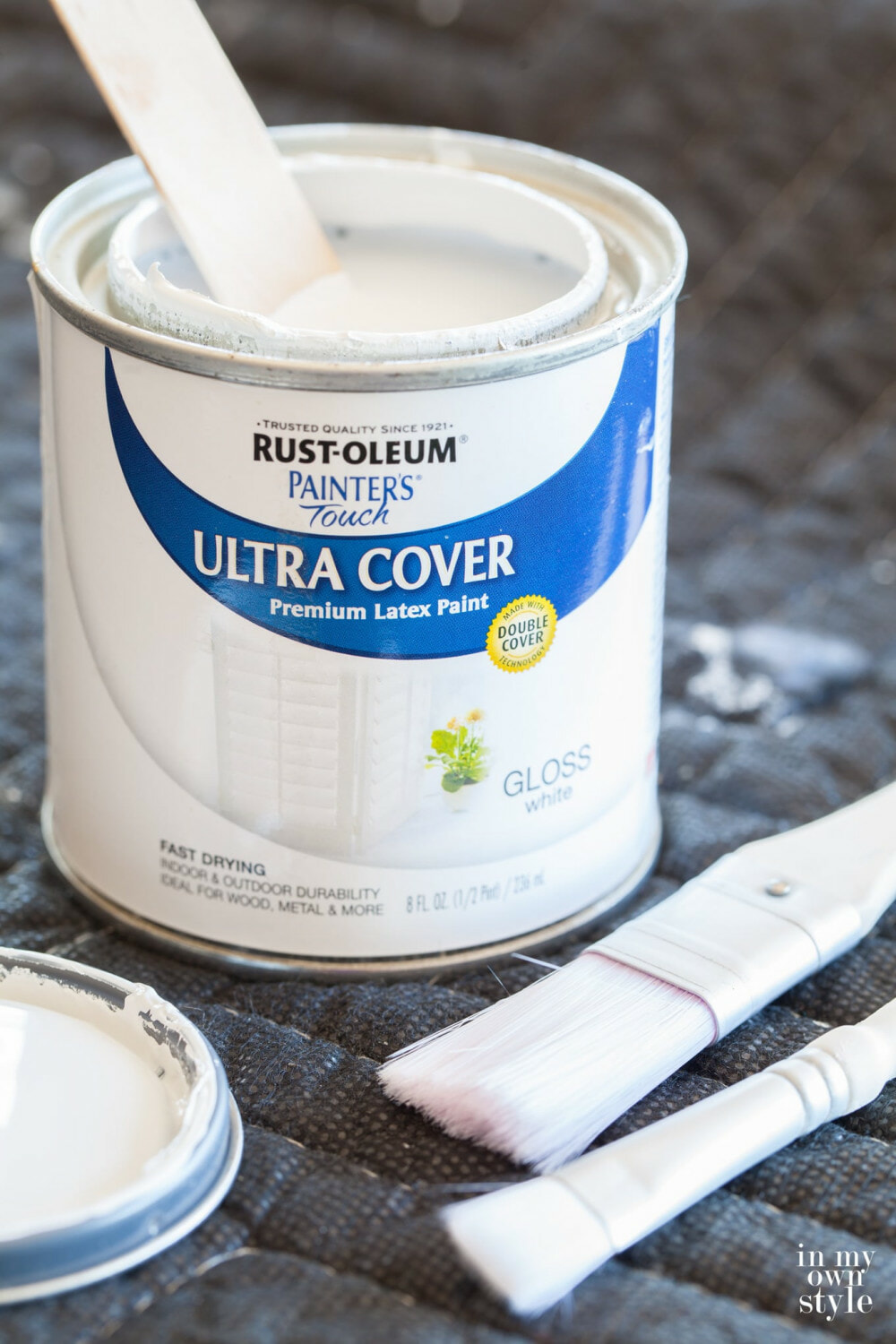 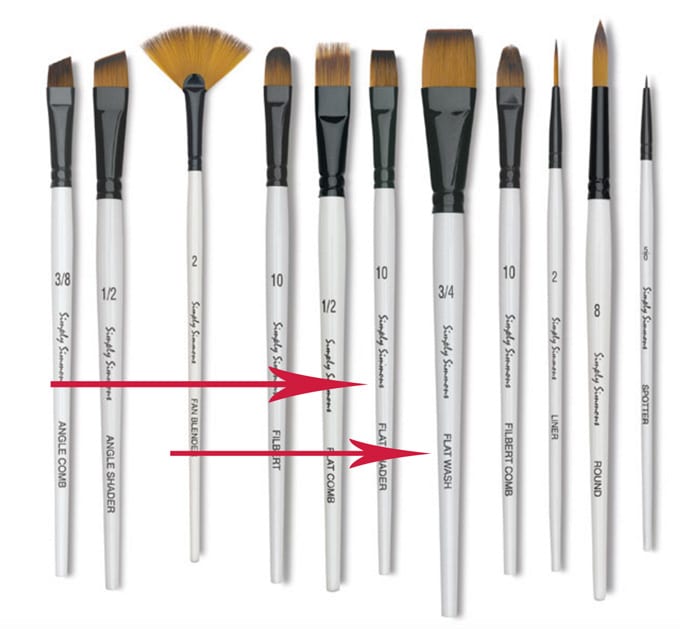 The artist’s paint brushes that I used to paint the area around the screening on the fan. You want it to be a square flat tip that is slightly stiff. 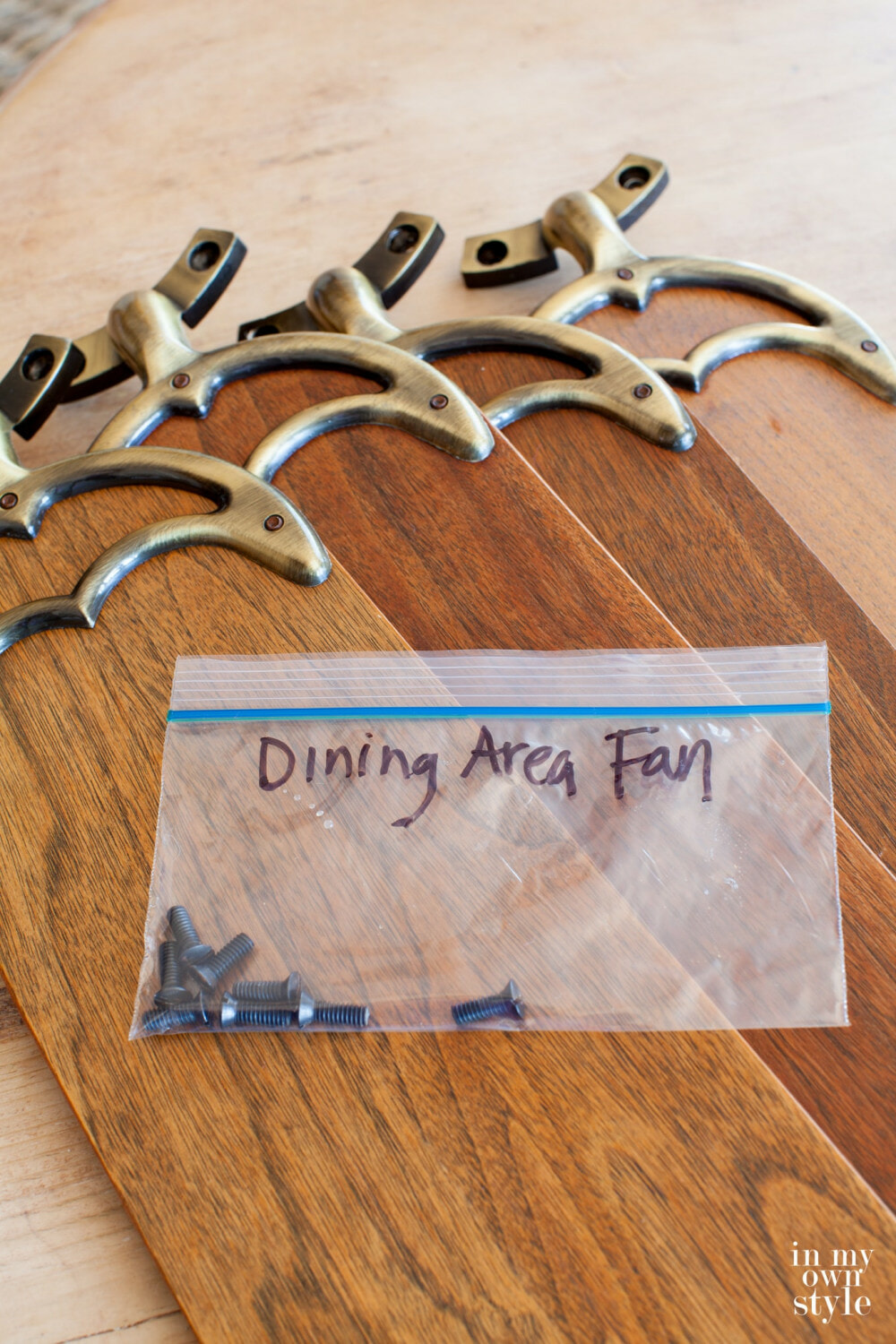 2. Using a screwdriver, remove each fan blade. Place screws in a baggie. If doing more than one fan at a time like I did, mark what fan they are from on the baggie.

3. Remove metal bracket from each blade and place these screws into a separate baggie so you don’t mix them up with the other screws when it is time to put them back on the fan. 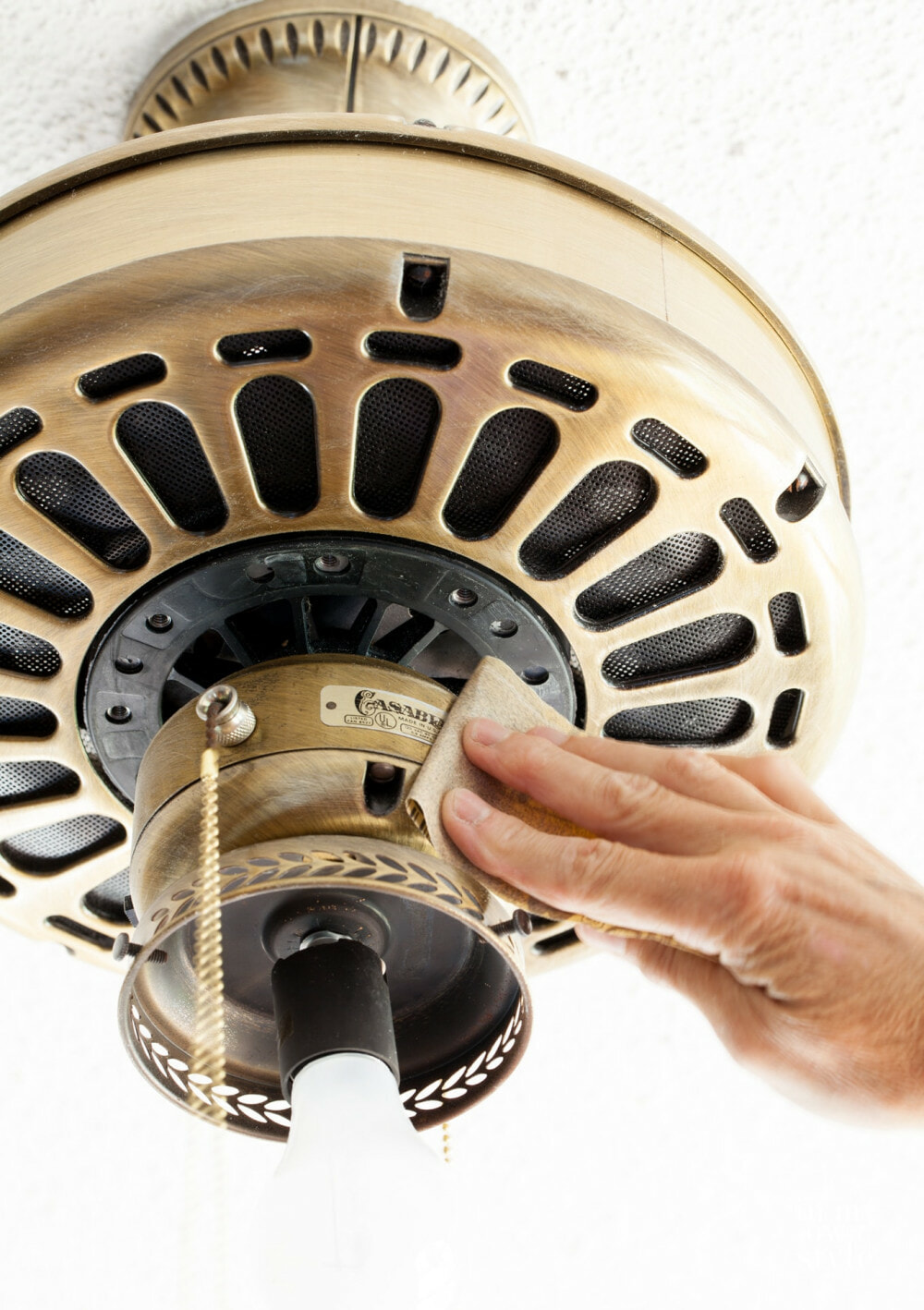 4. Fold a piece of 100 grit sandpaper over and go over the entire fan, cover, wood blades and metal brackets.

5. Clean all surfaces of sanding grit and then clean them with warm water and detergent to remove any dirt or grease. Let dry.

To help keep spray paint overspray from getting on everything for the spray painting part of the makeover, use large cardboard boxes to make your own spray booth. I flatten and save large boxes that I get.  They can be reused many times and stored flat against the wall in your garage or workspace. 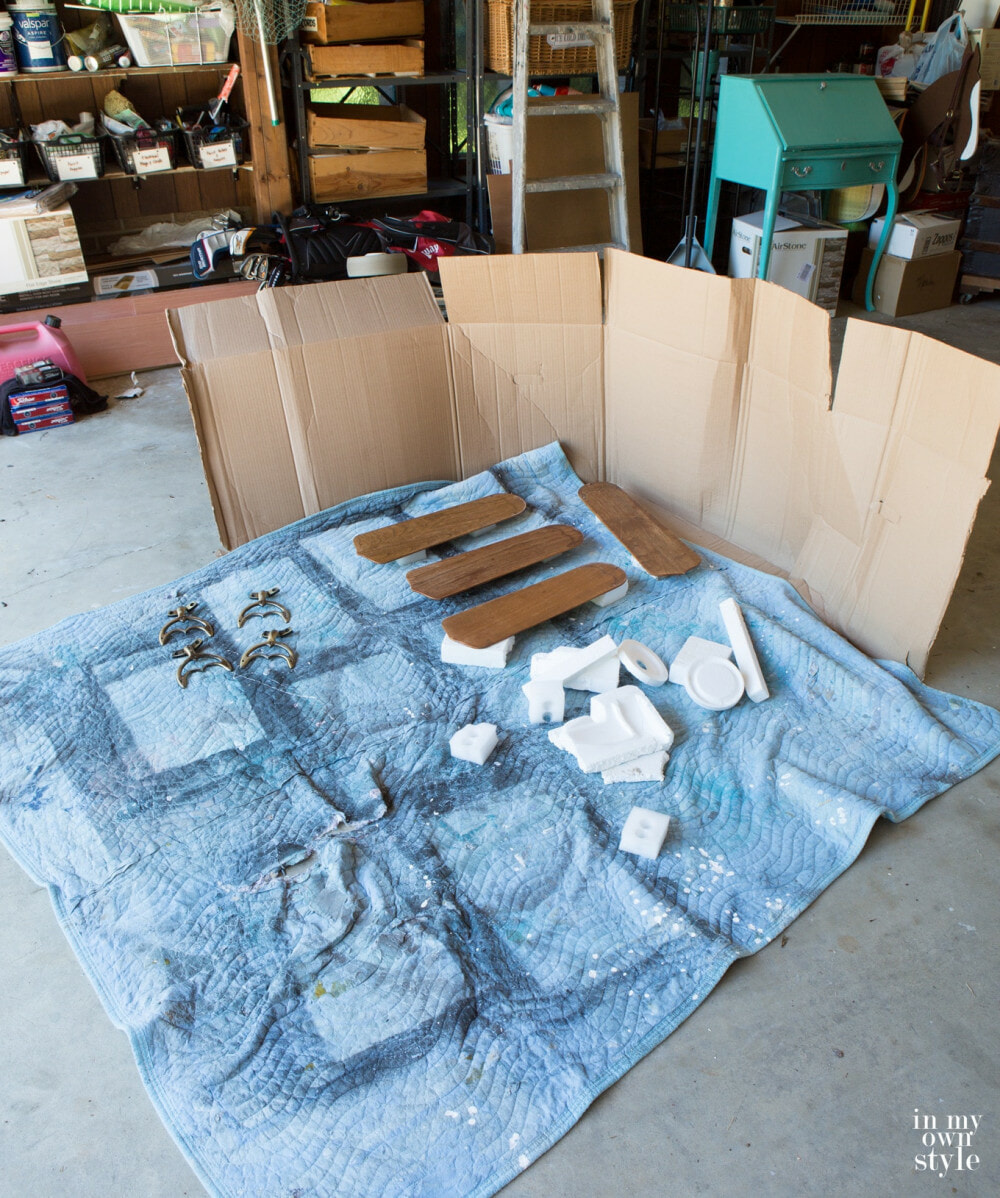 I set two boxes up so the bottom section of each is on the floor. I place a tarp over the bottom to hold the boxes in place and protect the floor. You can use boxes instead of a tarp for the floor.

Once you are finished spray painting, fold up the boxes and store then out of the way until the next time you need them. 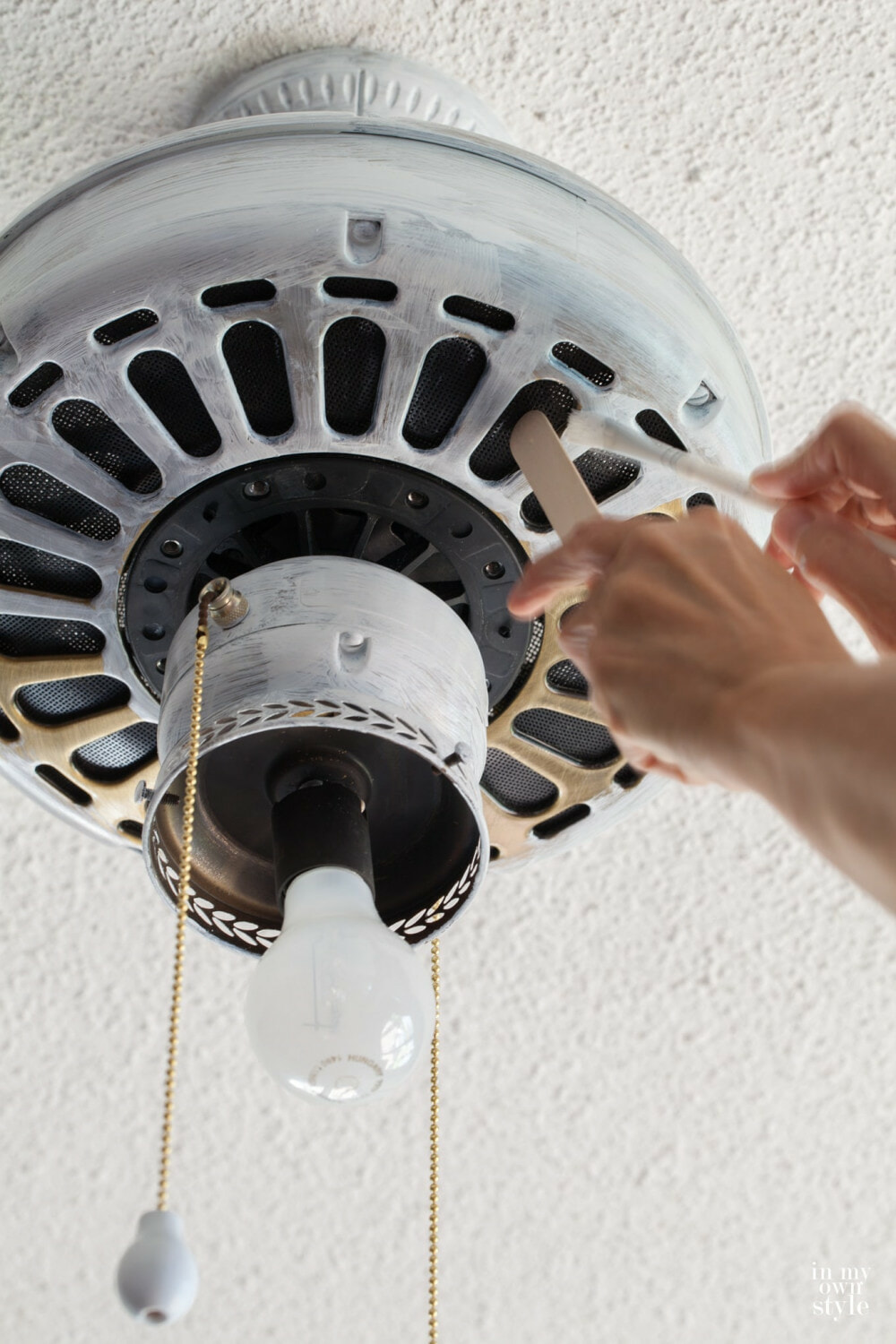 This step is where I would have liked to been able to remove the motor cover, but the bolts were way too hard to get off, so I did the next best thing….  I figured out a way to still paint the cover intact and not have to take it apart.

Note:  Try to remove your cover first as I mentioned earlier in the post. If it comes off easily, the job of painting a ceiling fan is even easier.

6. Use Rustoleum Ultra Cover paint in Gloss and a 1 -1/2″angled paint brush to paint the base/motor cover.  I like this paint because it dries to a nice smooth finish. I used it to paint the recessed lights in the kitchen of my previous house and they turned out great.

Make sure the power and breaker is off for the fan when doing this step. For the underside of the motor cover where the air vents are can be tricky to paint depending on your fan’s design. I used a craft stick to push the black screen up a tiny bit and used the flat side of a square tipped paint brush to paint around the openings. 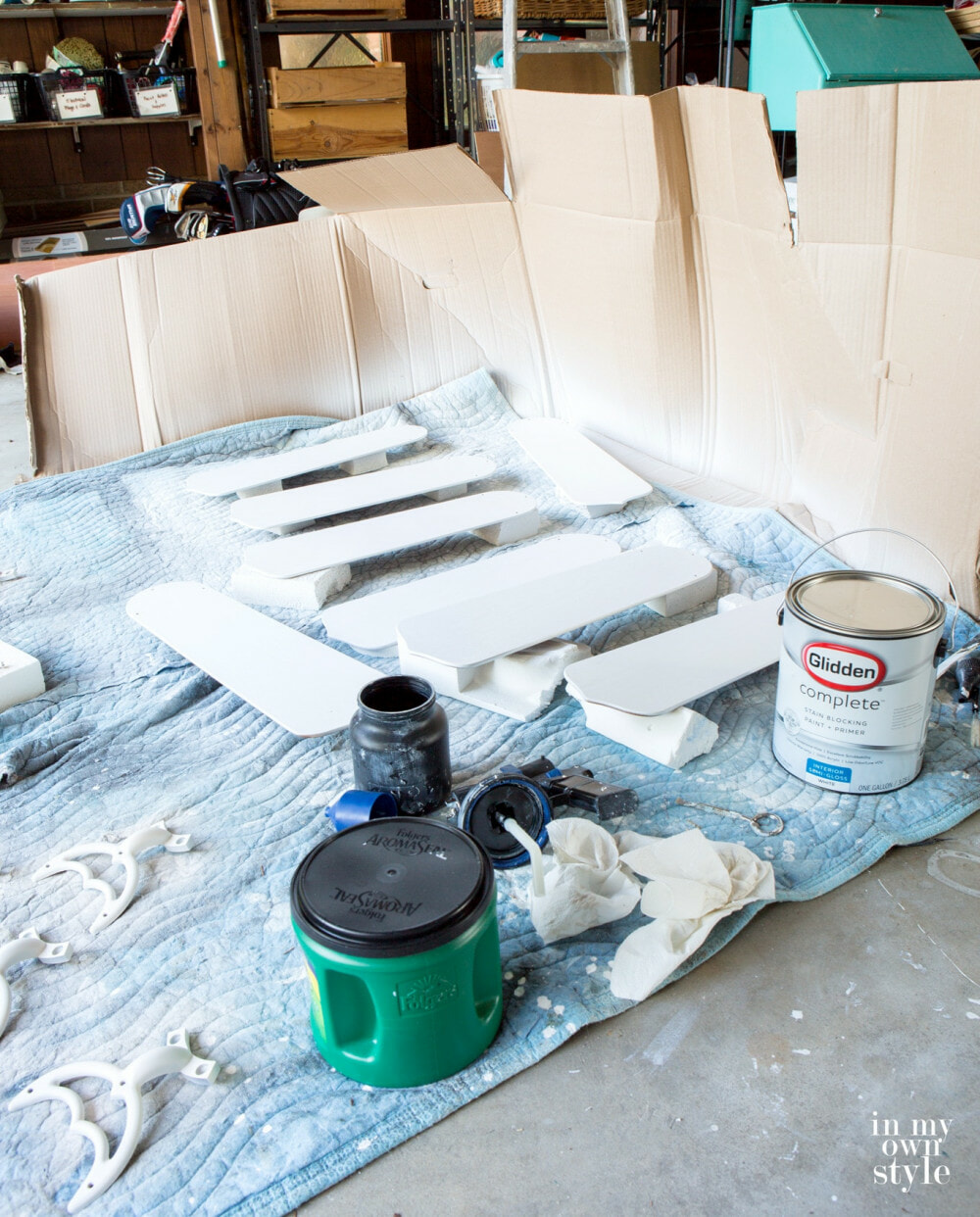 How to Spray Paint Screws Easily 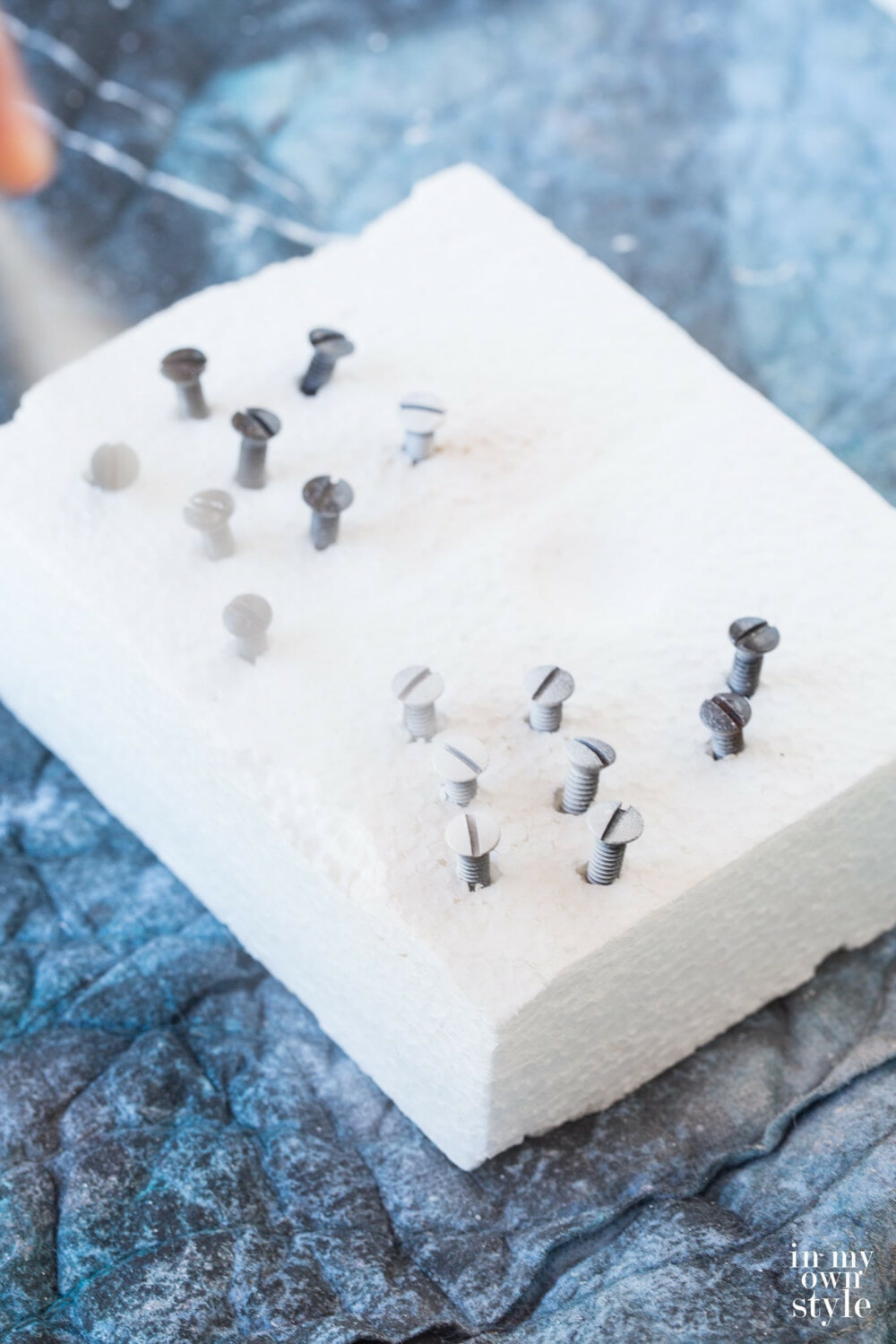 8. Push all the screws into a block of foam.  Use spray paint to paint the tops of the screws. A few light coats applied about 5 minutes apart will be enough.

9. Once everything is completely dry, reassemble the blades and metal brackets and attach them back onto the fan.

10. Touch up any areas with a white paint pen. I also used the paint pen to paint the tip of the screws that show up on the fan blades.

11. Turn electrical breaker back on and then the fan. 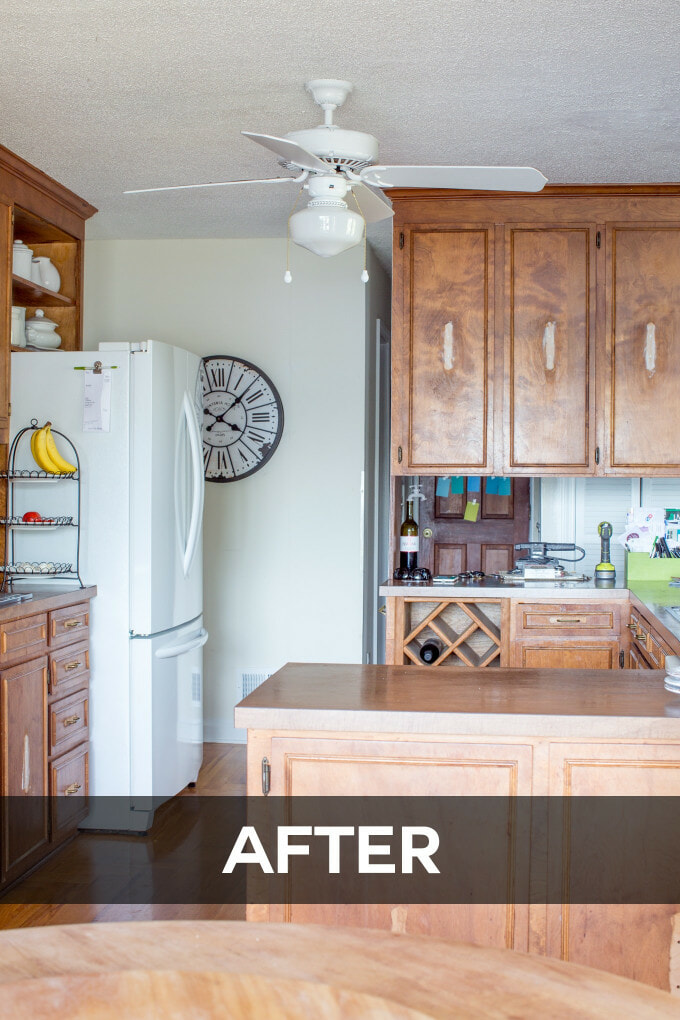 This is the ceiling fan in the kitchen…

…and this is in the dining area.

It took a few hours over a two day period to get both painted since I had to wait for the paint to dry.

Two more 1970’s brown objects updated…now my focus over the summer is going to be painting the kitchen cabinets.

To See More of The Updates I Made to This Kitchen:

If you want to see a colorful and fun way to paint a ceiling fan, check out this ceiling fan I did for my daughter’s room when she was little. It was one of the projects in my book, Instant Decorating.

Do you have a ceiling fan or light fixture that would look updated with a few coats of paint? 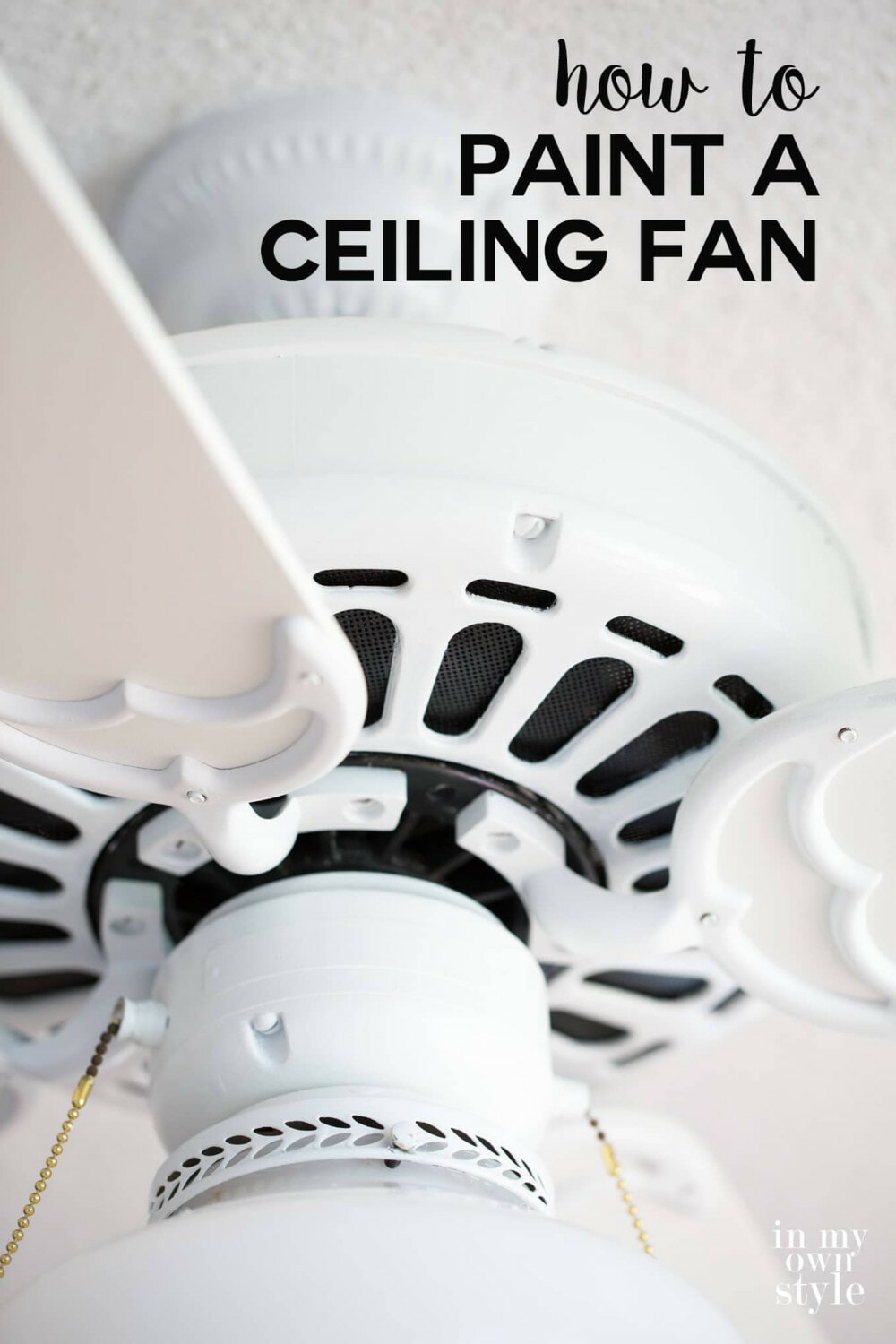 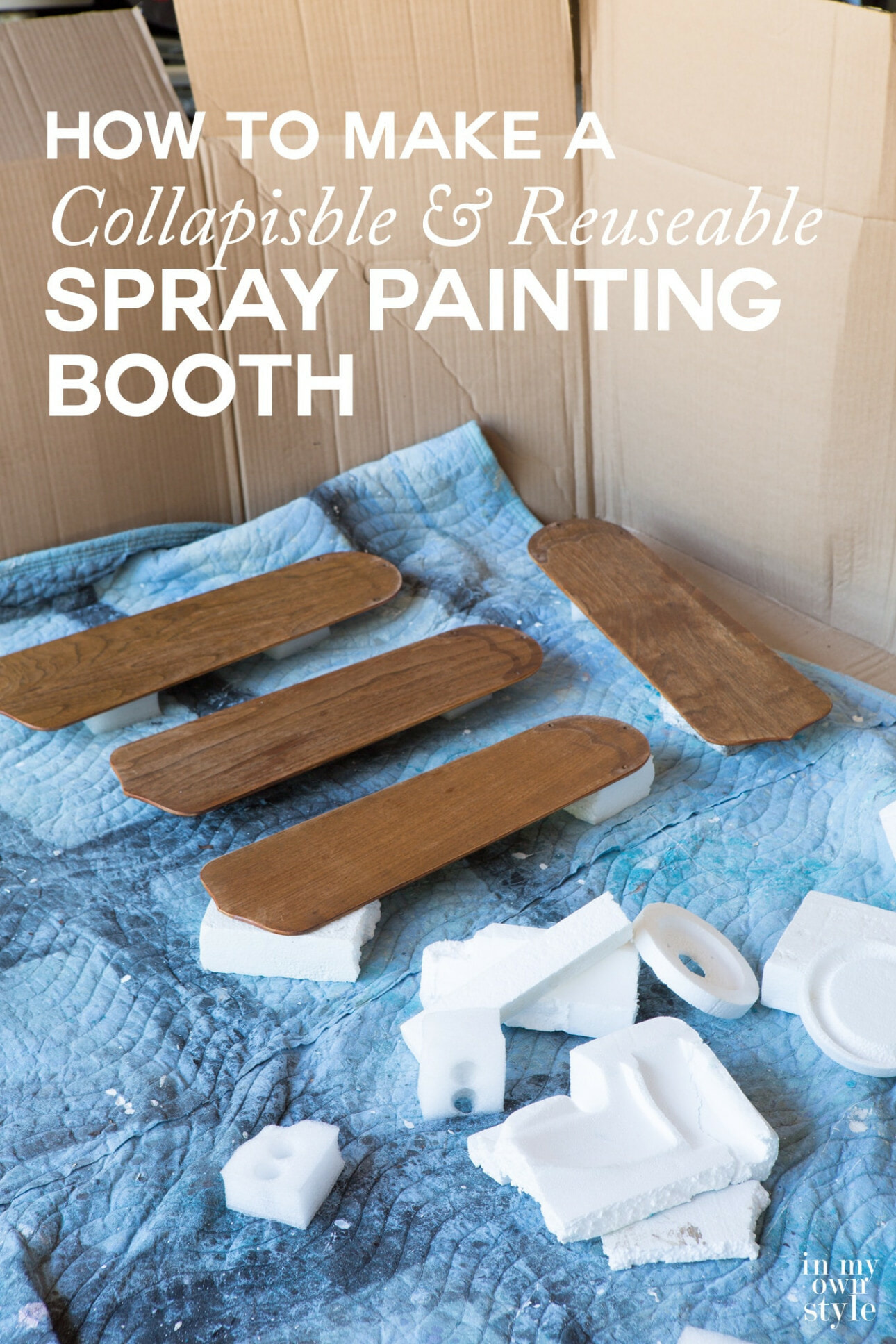 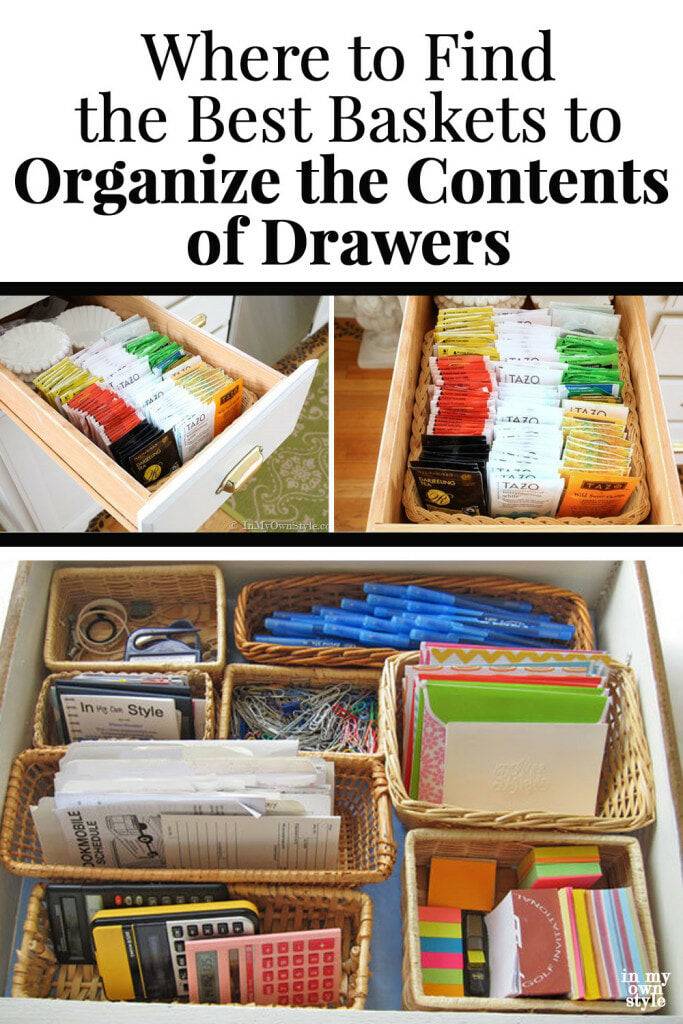 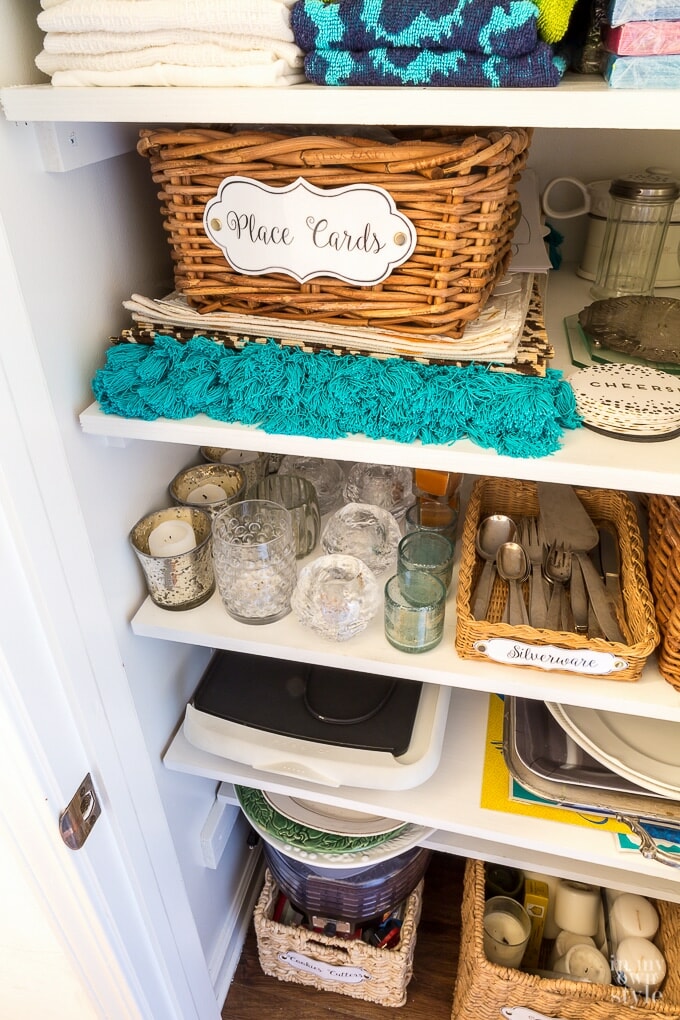 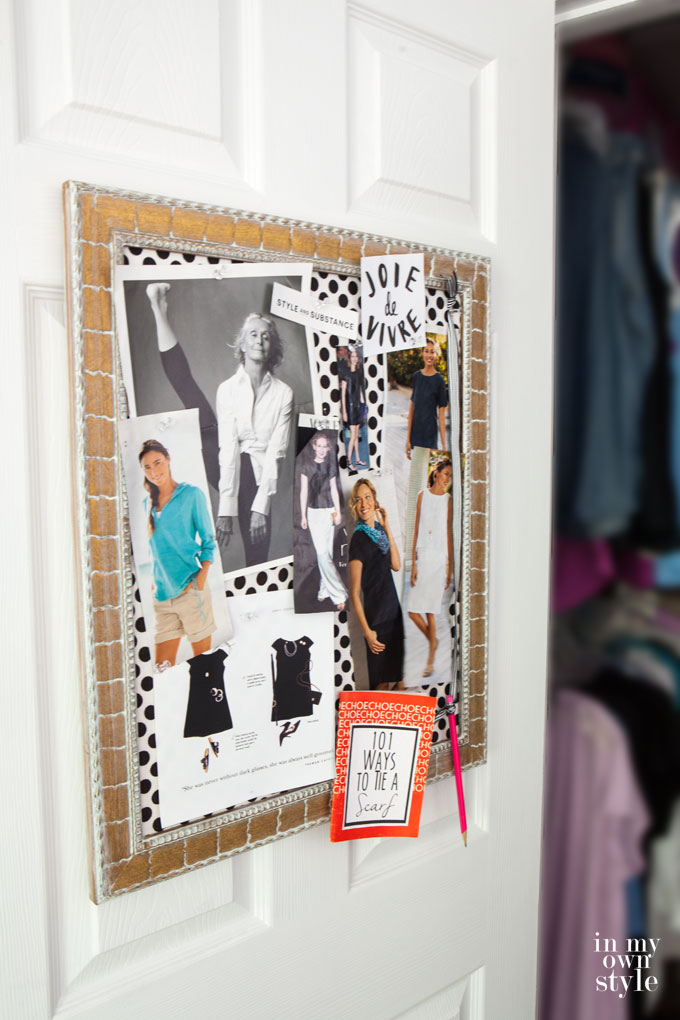 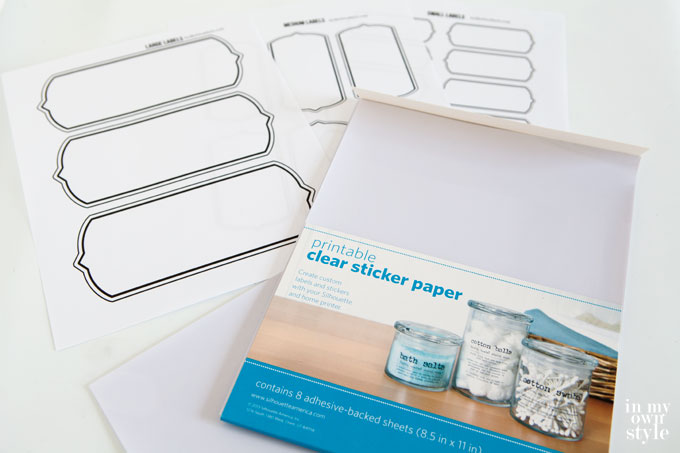