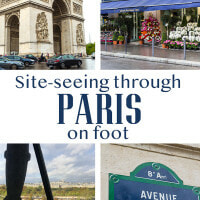 Today I am sharing more about my trip to France. If you missed my first post, you can read it here, Touring Paris By Bicycle.

When I was planning what Ed and I were going to do during our 4 days in Paris, I read a few guidebooks and also asked readers and friends for ideas. Paris is a big city with lots of things to see and do. Museums, shopping, historic sites and more.

After riding bikes through the city though, all my plans were forgotten. Once I got a taste of the city on that first bike riding day, I knew what I really wanted to do…

I wanted to see Paris… and as much of it as I possibly could so I could get a good understanding of each arrondissement. This meant Ed and I were going to walk and walk we did.

Why We Decided to Walk To Tour Paris

Walking in Paris is the best way to see it. Paris is not so big compared to other cities in the world and that’s why you can easily walk from one point to another. It is easy to navigate with the city cut in half, the Right and Left bank of the Seine. It is flat, except for the walk up to Montmartre which is uphill. With the help of Google Maps on our phones, we never got lost.

Before we even left for the trip, we both decided we were going to enjoy all that Paris offers and that included enjoying all the delicious meals. Buttery croissants with jam at breakfast, baguettes at lunch and dinner, a bottle of wine while leisurely sitting at chic cafes for dinner and of course, chocolate in many forms.

Walking to see the sites of Paris helped to balance our calorie intake. :-) My Apple watch tracked us at 11 miles a day.

In my initial planning of our trip, I figured we would be taking the Metro from place to place. We only used it once and that was on the last day in the city. That one trip took us to the Viking ship for the river cruise and the second part of our trip.

Our first day in Paris was the only sunny day. The second day it rained on and off all day. We didn’t let this dampen our spirits, though. We each had an umbrella and set out for the day.

Our hotel was on the Left Bank of the city in the 6th arr. right on the border of The Latin Quarter, where the universities are located and the St. Germain arr.

First stop of the day was to head towards the Avenue des Champs-Élysées in the 8th arrondissement on the Right Bank of the Seine.

From bike riding the day before, we learned about a shortcut through the grounds of the Louvre to get there.

Along the way we did see quite a few interesting buildings with a lot of details.

When we arrived at the Champs Des Elysees, we decided to walk up along one side to the Arc de Triomphe and then back down again on the opposite side.

I enjoyed finally getting to see these enameled street signs up close and personal. I was surprised to find though that many of them are covered with graffiti and stickers. This was one of only a few signs I could find that were not defaced in some way along the boulevard.

It is a wide tree lined boulevard. Walking along it reminded me of 5th Avenue in NYC, but with the addition of trees and chic cafes… a lot of them. The stores were the same as in NYC.

The cafes were open, but since it was rainy, it was not very crowded. I had to imagine how much more interesting walking along the avenue would have been if all the cafes were filled with people.

We got to the Arc de Triomphe where it was more crowded with photo taking tourists like us. We also saw first hand how crazy driving around the traffic circle can be.

Drivers have to be BOLD and know where they are going or else – crash! We overheard a tour guide tell his group that if you have a car accident while driving around it, insurance will not cover it. You have to drive around it at your own risk. Too many accidents happen.

Once we walked around the traffic circle, we headed down the other side of the Champs Des Elysees. It was exciting to see Fashion Week events being set up all over Paris while we were there. I was not sure if this display in front of Dior was one of them or was being set up for the holiday shopping season. Since my background is in retail display, watching the workmen put this up in the rain was fascinating to see.

We then headed back in the direction of the Left Bank to explore more and to see something that was on my Paris bucket list that I HAD to see.

We passed a Metro station and briefly thought, “should we take it”, but decided to keep walking so we would see more of the city.

As we walked, we passed so many interesting buildings like these two. A modern earthy one covered in plants and vines, right next to one in classic Parisian style.

We crossed the river to arrive here.

To the Museum D’Orsay. It is where the Impressionist paintings are. We got there very late in the day and didn’t have much time to explore the entire museum before it closed, but that was OK with me. I had only one thing I wanted to see.

We headed straight up to the 5th floor and practically ran through the Impressionist gallery weaving through art lovers gazing and studying the art.

At one point, Ed said, “Do you realize we are passing by millions of dollars worth of art and not stopping to take a look”. Yes… it wasn’t what I came to see. :-)

This is what I came to see.

The huge Roman numeral clocks that you can see through, out into the city. I adore Roman Numeral clocks and had to see these clocks both inside and outside of the museum.

There are two of the clocks. One in the museum’s cafe and this one where visitors can take photos. It was crowded with people all wanting to get their photo taken with the clock. I did get a photo, but it came out too dark and we didn’t have the time to retake. I was happy to get a photo of it though with my big camera without anyone in front of it.

In our hotel room, there was a framed photo of the clock with two people standing in front of it. It gave me the idea to frame my photo to hang in my house. My souvenir from Paris. :-)

On the top floor of the museum there is an outside area that has wonderful views of the Right Bank of the city. I wanted to go outside, but the doors were locked because of the wet weather. They didn’t want wet shoes walking through the museum. I took this photo of one side of the Louvre through a glass door as the sun started to come out around 5:30.

We had the night bike tour scheduled for 7:30 so we headed in that direction while passing more interesting streets, buildings and charming shops.

The rain had stopped so we got to enjoy another dinner eating outside on the street at Le Saint Germain cafe.

It was delicious. I enjoyed sitting outside watching the world go by as much or even more than the food.

Getting to eat at chic outdoor cafes for dinner was the one of my favorite parts of the trip. But bike riding was my #1.

Wait until you see how much more we did while in Paris and then through the Normandy region on a Viking River Cruise. Stay tuned. More posts to come.

Other Posts About My Trip to France: