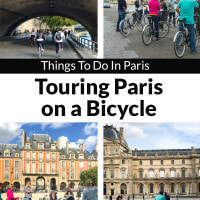 This is the first in a series of things to do in France. The highlight of our trip was taking a Paris Bike Tour. Not only did we enjoy a day bike tour, but we also rode in a Paris bike tour at night.

I’m back… to home sweet home!  For readers who haven’t been following my trip on Instagram or Facebook, Ed and I spent 12 days in France. 5 days in Paris and 7 days on a Viking River Cruise along the Seine.

Ed and I love to travel and I have learned to enjoy every minute of our trips, so I didn’t do any work while in France. Not sure if that was the best decision since it has taken me 2 full days to tackle my email. If you left me a comment over the past two weeks and I have not responded to your question yet, please know I am working on it.

I did take hundreds of photos though, so that I could share the best parts of the trip in a series of posts with you over the next few weeks. I’ll start with what we did the first two days in Paris, which were the only perfect weather days of the trip.

This was my first trip to France. I wanted to see everything, but since we only had 5 days, we had to edit our “things to see and do list”. We enjoyed everything we did, even with rainy weather.

We used our frequent flyer miles and found a nice and affordable hotel, the Hotel Trianon Rive Gauche using Hotwire.

Our flight left South Carolina on Sunday at 3:00PM EST and we arrived in Paris at 7:00 AM on Monday morning Paris time. We planned to drop our bags off at the hotel since check-in was at 3:00, but were pleasantly surprised that our room was ready.

The hotel was perfect. A small boutique hotel with a teeny-tiny elevator, lift with a metal grate door. It was so small that it only held one person. We used the steps since we were only on the first floor.

We were tired from the 10 hour flight, but decided not to sleep and instead get out into the city since according to the weather reports, it was going to be the only sunny day all week.

I had pre-booked a bike tour with Bike About Tours for our second day in Paris.

When we arrived on Monday morning, I called the bike tour company to see if they still had openings for the Monday Day Tour (our first day) while the weather was still nice.

I am glad we switched days! Since it rained the rest of the week. Riding bicycles through Paris was the highlight of our trip. It was so much fun that we signed up to go on the Evening Tour to the Eiffel Tower to see it sparkle the following evening – which was pretty magical.

I like that there were only 8 of us on the tours which made it more personal and easy to stay in the group.

I found out about Bike About Tours in a Paris guide book that I bought a few weeks before our trip.

This is the path we took on the day tour. The night tour followed a different path to the 7th Arrondissement, ending at the Eiffel Tower. Each tour was approx. 4.5 hours.

Simon, our tour guide, was great. He was very funny and shared a lot of interesting things about the city that we would have never discovered on our own. He was one of the reasons the tour was so special.

The bike tours leave from the Marais district in the 3rd Arr. We went over quite a few bridges.

Saw not one, but quite a few tourist boats along the Seine. Ed remembers the Bateaux Mouche from a long ago trip to Paris but there are many different options now.

One of the first stops was the square of Place des Vosges, that straddles the 3rd and 4th arrondissements in the Marais district of Paris. We learned it is the most prestigious address to have in all of Paris.

Each home is a private residence that appear virtually identical. On close inspection you can see that each home has something unique about it. Some of the homes have been newly renovated and have pretty flowers filling the flower boxes.

After we left the Marais, we headed along one of the quais along the Seine for the Latin Quarter.

To get there, we passed by Notre Dame. From the front it still looks OK after the fire, but not from the back or sides. (See more photos about this later in the post).

The Latin Quarter was filled with interesting homes. I was especially intrigued to learn of a rather unique aspect of the Paris cityscape. Behind every arch in a wall, gate, or door like the one above is a private courtyard for the apartments and homes on the block. It gives the inhabitants a quiet place away from the noise of the city.

Our bike ride continued and took us down the rue de l’ Ancienne Comedie which is a narrow cobblestoned street.

With cute shops, a chocolaterie, and restaurants.

The hidden wonders included the famous Le Procope restaurant, frequented by Benjamin Franklin when in Paris. A few days after the bike tour, Ed and I met up with a Parisian friend of Ed’s to eat dinner there.

Next we headed back over to the Right Bank and rode around the courtyard of the Louvre.

Getting to see the glass pyramid up close was a highlight. Both of our bike tours took this detour and it was truly fun to see the iconic glass pyramids throughout the courtyard.

From the Louvre, we rode to a few other places and then made our way back to the Marais to end the tour via another quai where there was less traffic.

As we walked back from the Marais district to the Latin Quarter where we were staying, we stopped at a cafe along the Seine to eat dinner.

There are so many cafes like this throughout the city. Each one includes similarly chic round cafe tables and woven French chairs. And they all face out for perfect people watching!

It was a perfect day and a perfect meal. I felt like I was in a dream and had to keep saying to myself, “Diane, you really are in Paris!”

While we ate dinner, Ed and I talked about how much fun the bike day tour was and decided to book the evening tour with Bike About Tours with the same tour guide, Simon, for the following day.

Touring Paris By Bicycle at Night

The evening bike tour started at 7:00 PM. It was a rainy day, but the rain had stopped a few hours before so the bike tour was on.

We went over more bridges and passed a large group of Parisians participating in a fitness class on the bridge.

Saw more tourist boats go by on the river.

And got to see the fire damage of Notre Dame up close from a small side street.

We were told all about the fire and how it probably started from a workman’s cigarette.

The wood you see under the flying buttresses has been added to provide support until they can figure out how the cathedral will be repaired.

Bike About Tours is near Notre Dame and Simon our tour guide took a photo while it was burning. His dramatic photo was shown on news channels all over the world.

…as dusk turned into dark.

Many of my friends have asked me, “Was it safe to ride in the city?” Yes! When out on busy streets we stayed on the bike lanes which are much wider than bike lanes in the US.

We also took many side streets where there was little to no traffic. I felt totally at ease and safe.

The night bike tour took us to the Louvre again, but this time, the glass pyramid was lit up from within.

We rode around the Palais Royale, more quais, saw the tunnel where Princess Diana died and then headed over to the Left Bank towards the Eiffel Tower.

On the hour, the lights on the tower twinkle for a few minutes. Simon added to the twinkle with some sparkle from a bottle of champagne he brought. :-)

It was pretty magical.

Riding a bike through Paris was the best way to explore a city that was new to us. We covered so much ground that we never would have if we walked it. We also wouldn’t have seen all of the spots if we had taken the Metro from place to place.

The bike tours were truly the highlight of sightseeing through Paris for me.

I am going to look into going on a bike tour in every city I visit from now on.

To keep reading about this trip, select the links below for:

Part 3: Why I Didn’t Take the Eiffel Tower Steps