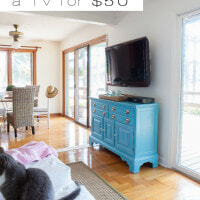 How to hang a TV on a wall that will swivel and how to hide the ugly black cable box and wires.

When we first moved into our lake house back in December, we had to figure out where all of our furniture would go. Almost everything fit, some pieces were used in different ways than in our previous house.  The pieces that didn’t fit, we sold, donated or gave to our daughters. One of the items that didn’t quite fit was our large flat screen TV. In our previous house it was mounted on the wall above the fireplace.

In the new house, mounting a wall TV over the fireplace would not work well since the firebox opening was much larger and the mantel higher. The TV would not fit. 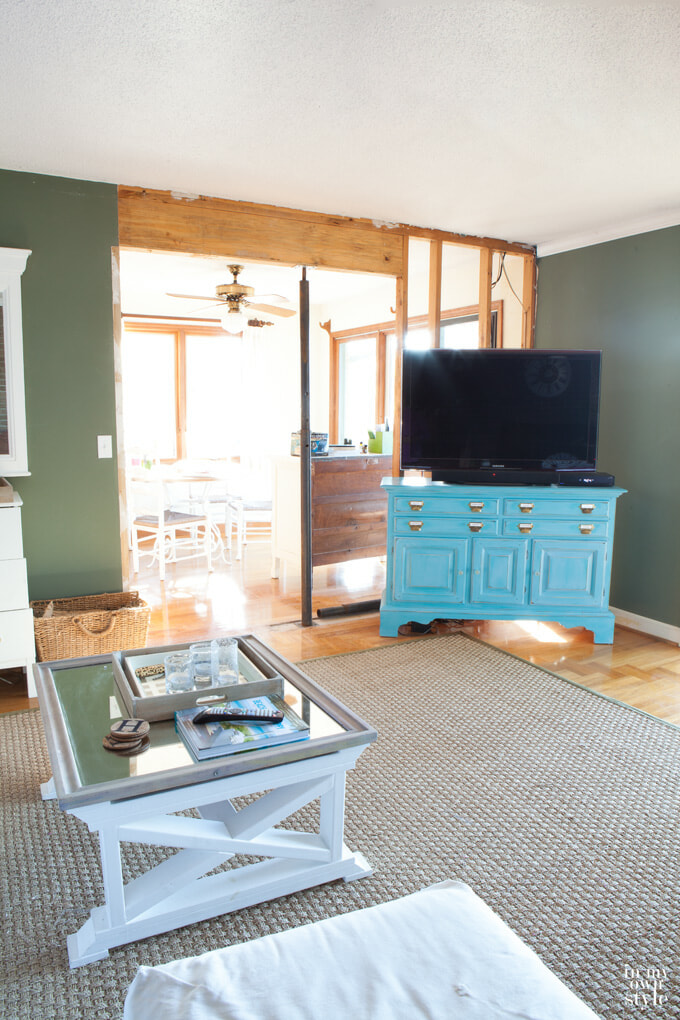 While we did the work on removing the wall between the living room and dining area of the kitchen, the TV sat in a stand on the turquoise sideboard.  Once the wall was gone though, we knew we were going to have to come up with a new plan for it. 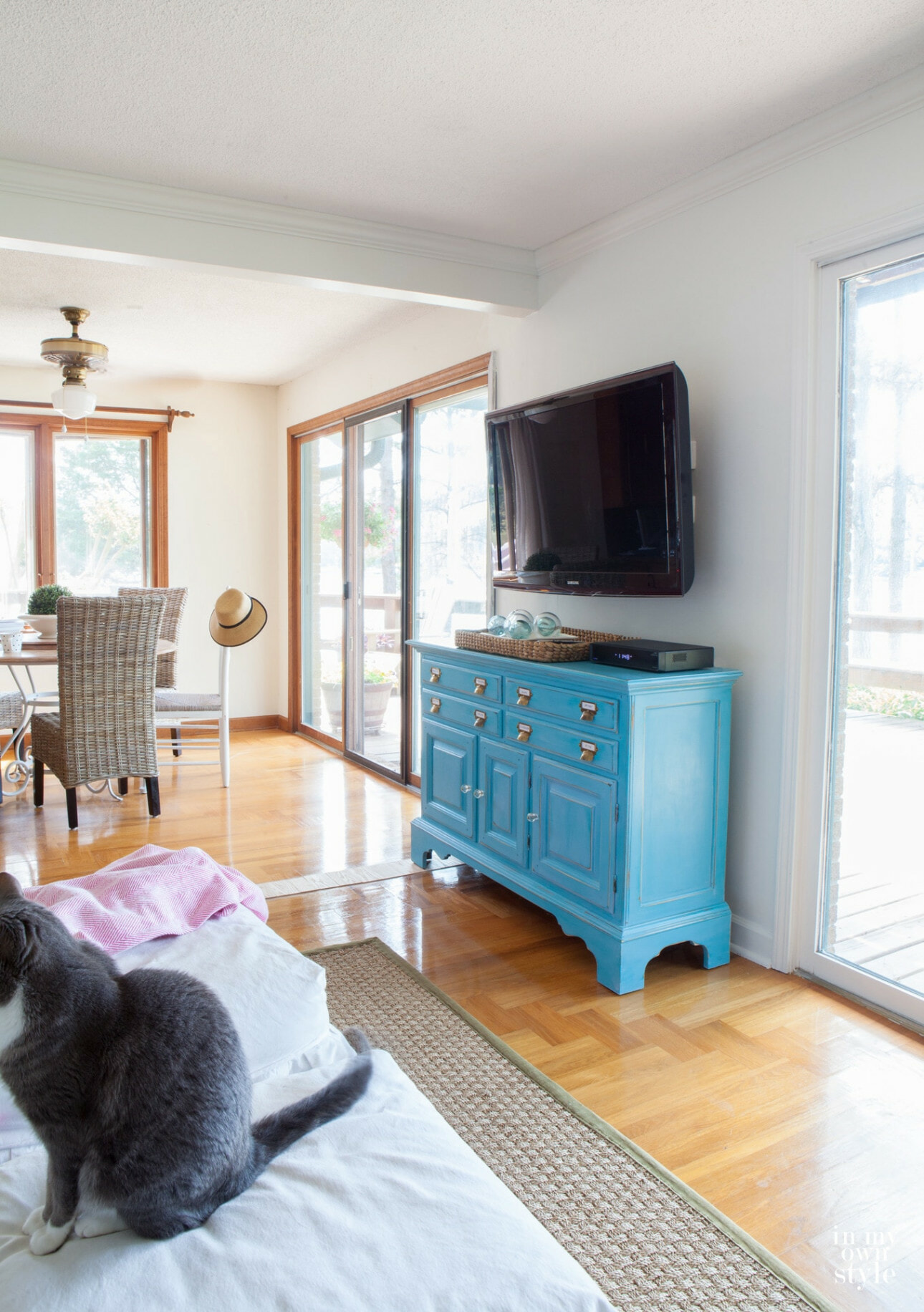 We came up with mounting it on the wall, but not just on regular TV mount…

… but one that swivels so that the TV can be easily moved to view from the living room as well as the kitchen.

It didn’t take long to get the TV on the wall once we had all the components in place.

How To Install a Swivel TV Mount

Once you have these components, hanging the TV is fairly easy. Here is what we used:

I was a little skeptical that it would hold such a large TV, but it does and very well. The wall mount needs to be secured into the wall studs. Of course where I wanted to center the TV on the wall, there were no studs. :-( 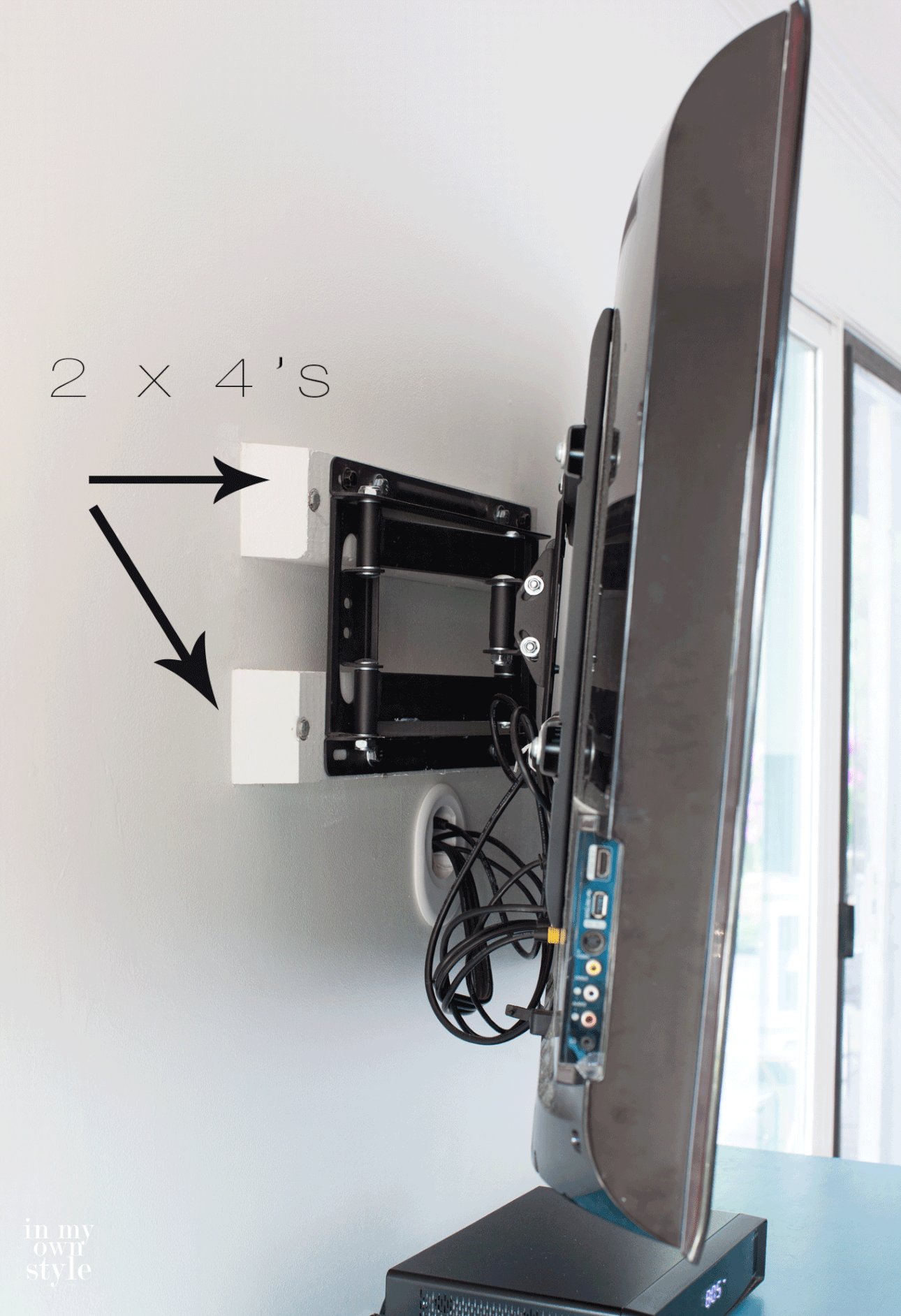 To remedy this situation, we needed to attach two – 2 x 4’s that were long enough to be secured to the studs. We attached them to the wall with lag bolts. It does bring the TV out 2″ more, but not a big deal. It would have looked nicer from this side view, but the 2 x 4’s were needed.  Once the 2 x 4’s were secure we attached the swivel TV mount with the hardware it came with.

The TV is centered on the wall, but the actual swivel TV mount is attached slightly off-center to the right. This is the way is is designed so that the swivel arm has room to move out and then side to side.

We wanted to have the cords come out of the center of the mount, but the power kit was not long enough. I wanted the TV higher, so we opted to have the top of the power kit come out of the wall below the mount. It would have looked better when the TV is swiveled to the living room, but life is not perfect. :-) I did play around with a wood frame to cover it, put it just made it look junky.

I do plan to hang drapes on the glass doors that frame the TV. They might be enough to draw the attention away from the TV when it is out and swiveled. 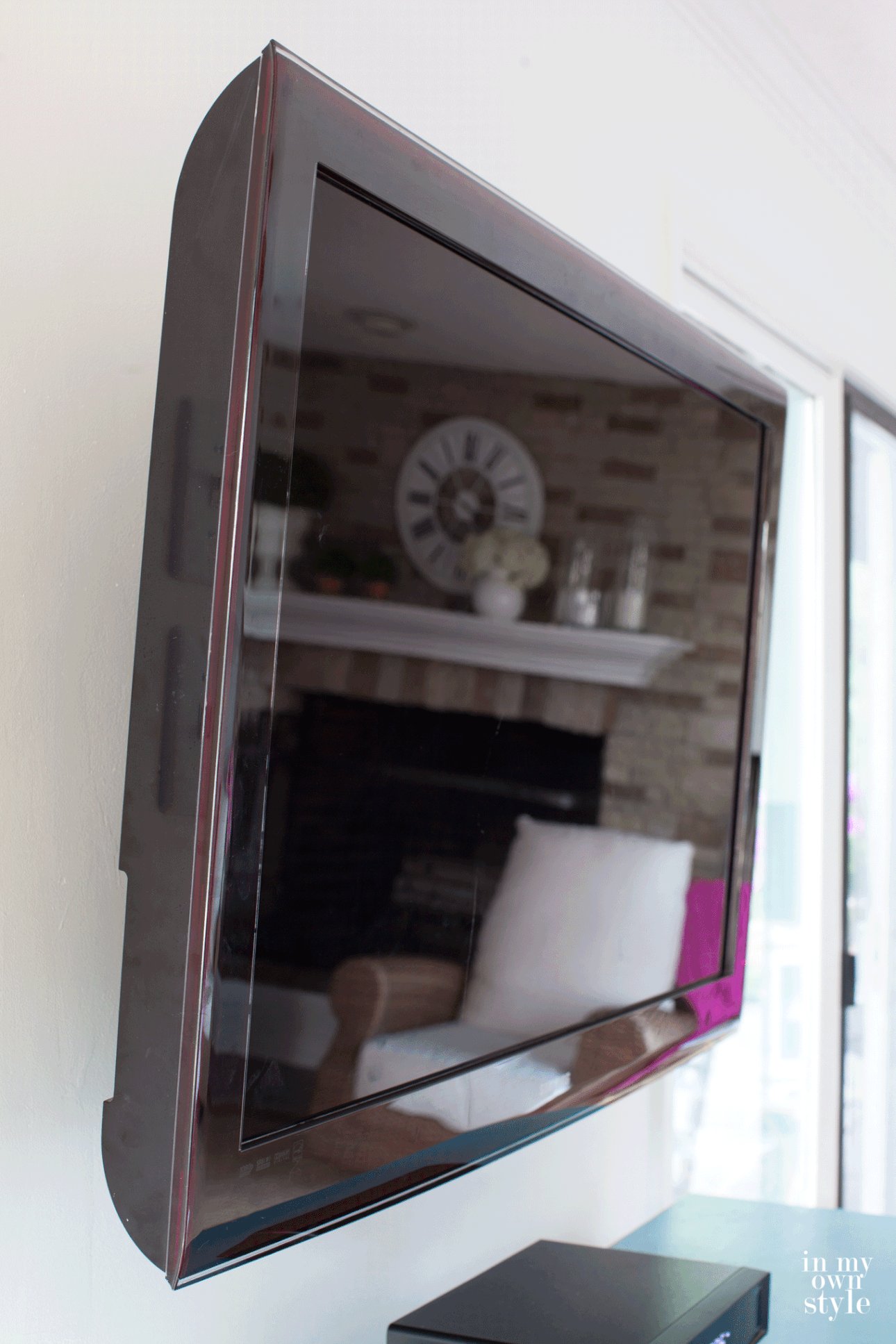 When the TV is back against the wall, you don’t see the swivel mount or cords.

2. Installing an in-wall cord system to run the cords behind the wall. We used this In-Wall Cover and Power Kit from Home Depot. 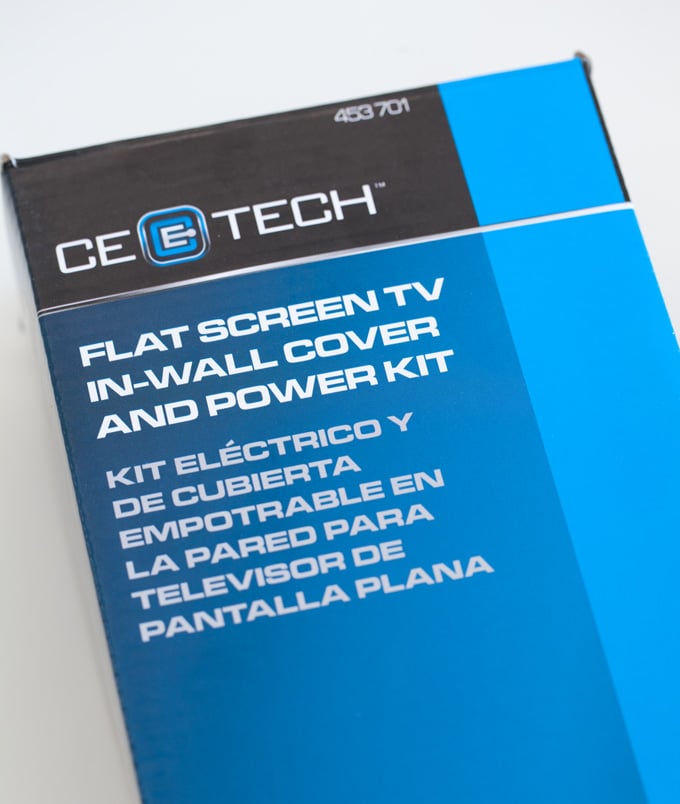 We used this kit before in the fitness room in our previous house. You can see how to install it in this post: How To Hide the Cords on a Wall Mounted TV. It is one of my most popular posts. It seems many of us want to hide those ugly black cords. :-)

3. Getting the power strip off the floor – To try to keep the jangle of cords somewhat organized, I mounted a power strip on the back of the sideboard using Command Brand Picture Hanging Strips. 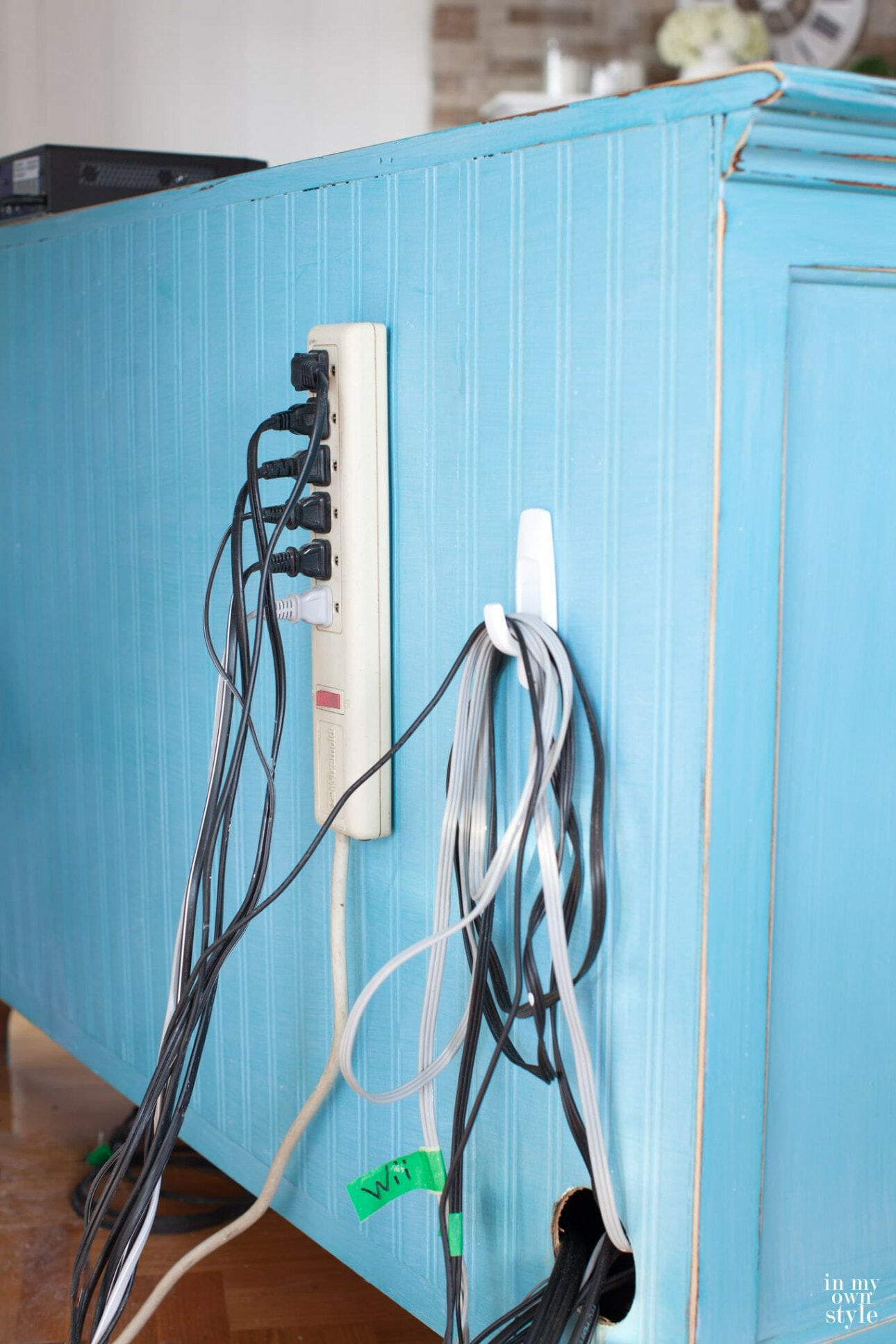 I used 2 of the large size strips. 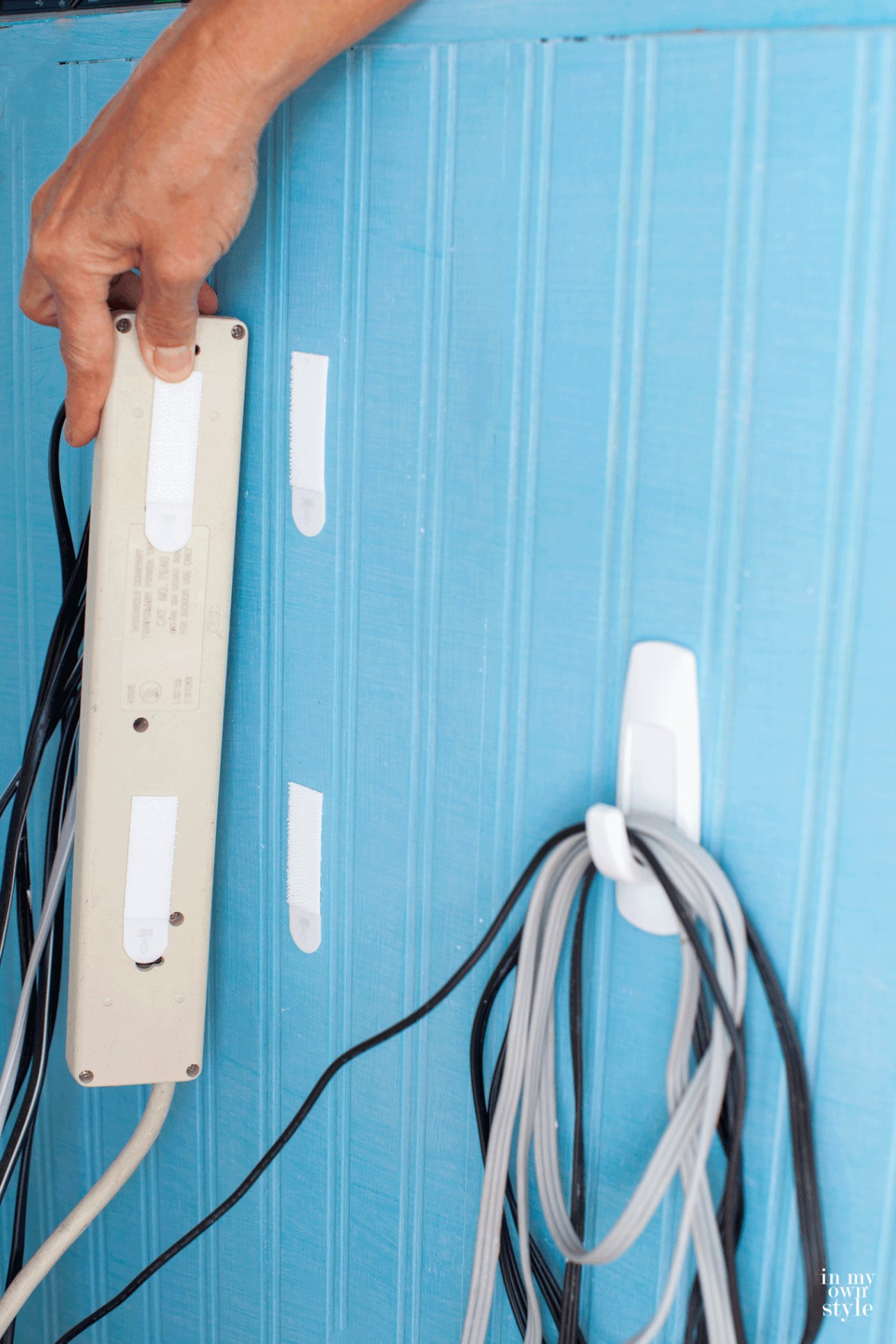 I placed one on the bottom and the other on the top of the power strip. A Command Brand hook holds up all the excess cords that we only use once in a while, like the cords for the Wii. These do not run through the wall. We simply plug them into the ports on the side of the TV when we need them. 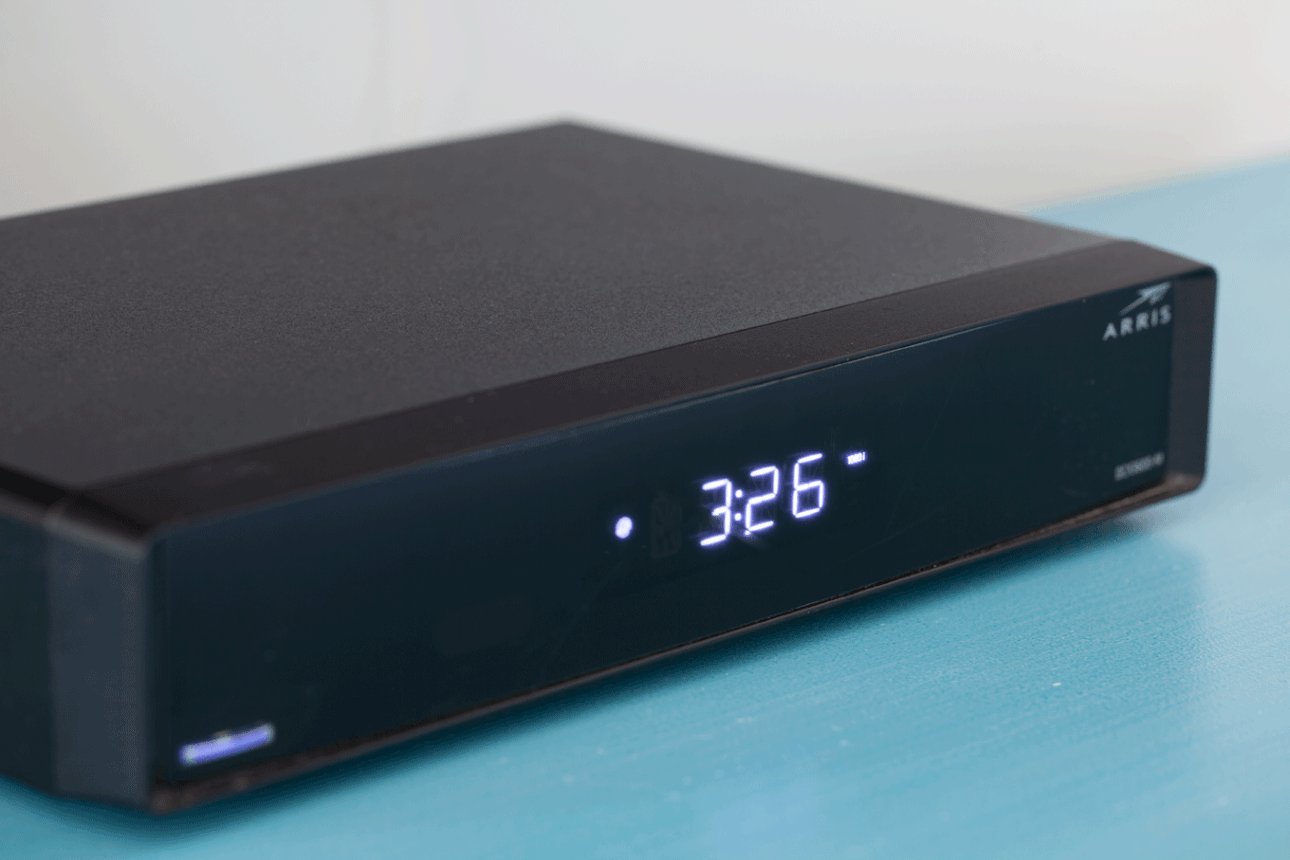 We also moved the cable box on the top of the sideboard. 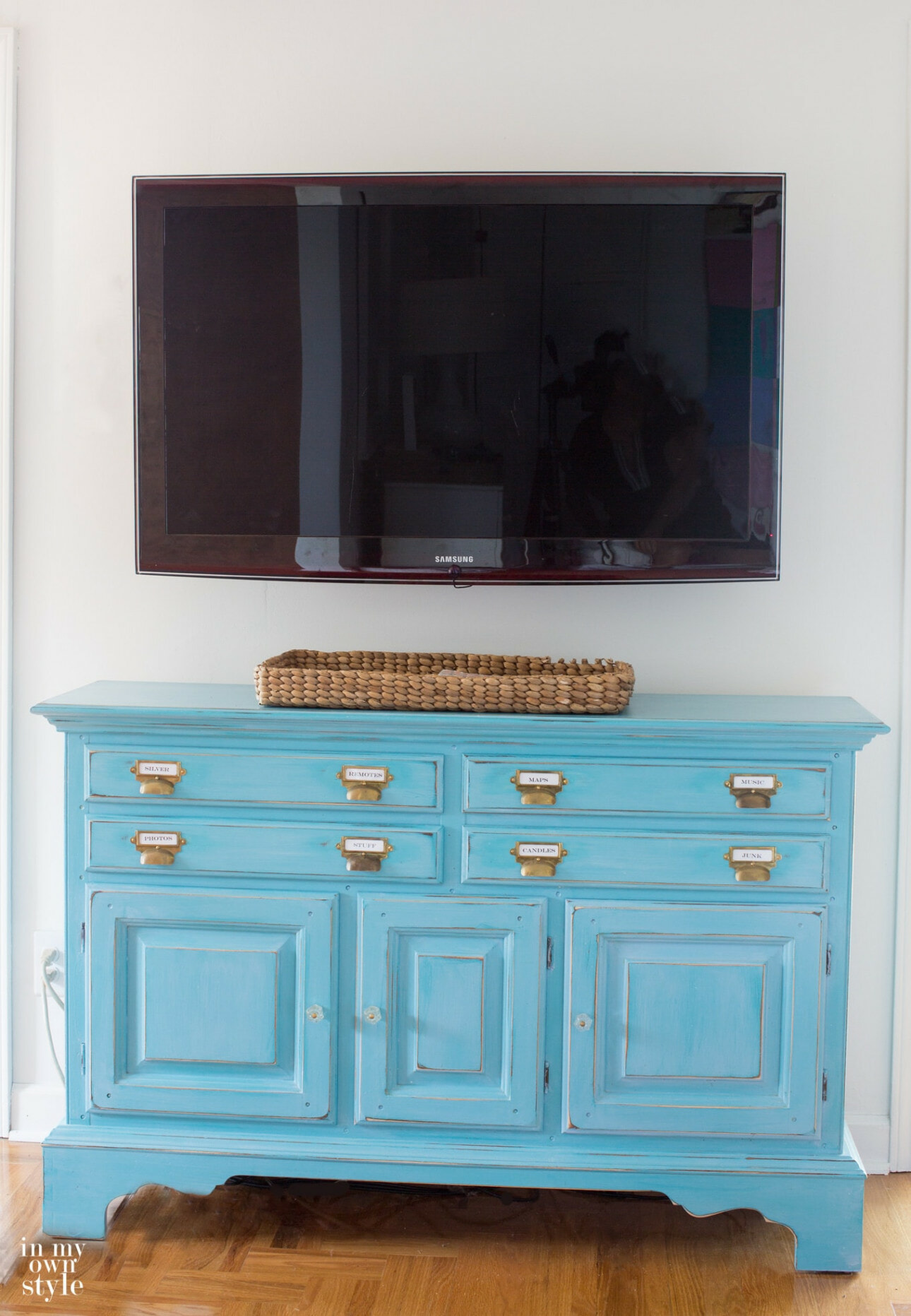 We hid it in the dresser and used this Infrared Receiver bought on Amazon. See the black dot on the center bottom of the TV?  The cord to that goes through the wall and then through a hole in the back of the dresser and into the cable box.

If your TV is above a mantel and your cable box sits on it. Here is one easy fix that may help you hide it. 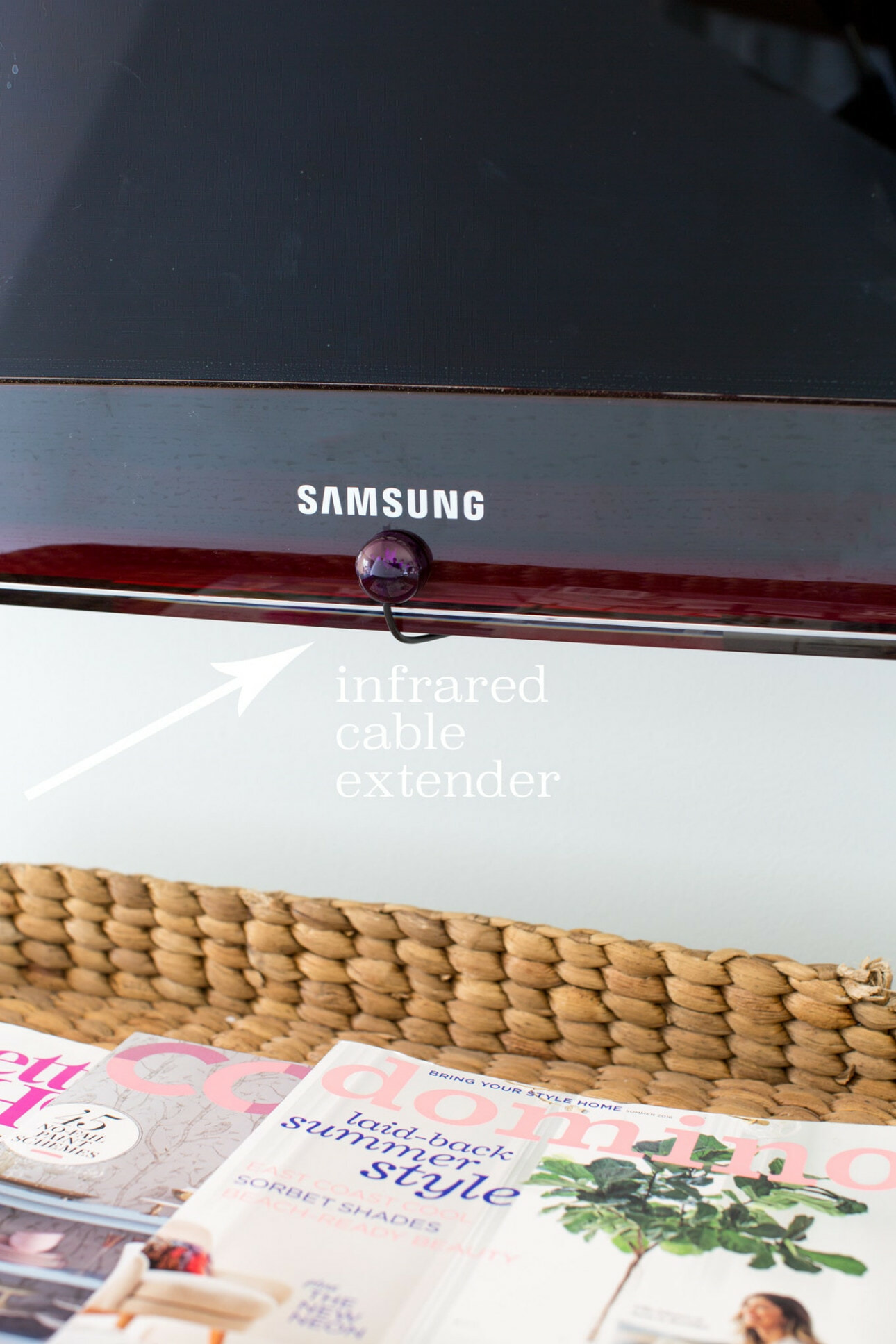 The infrared receiver only costs $16 and it works perfectly.

This is the item you need to hide the cable box: Infrared Receiver 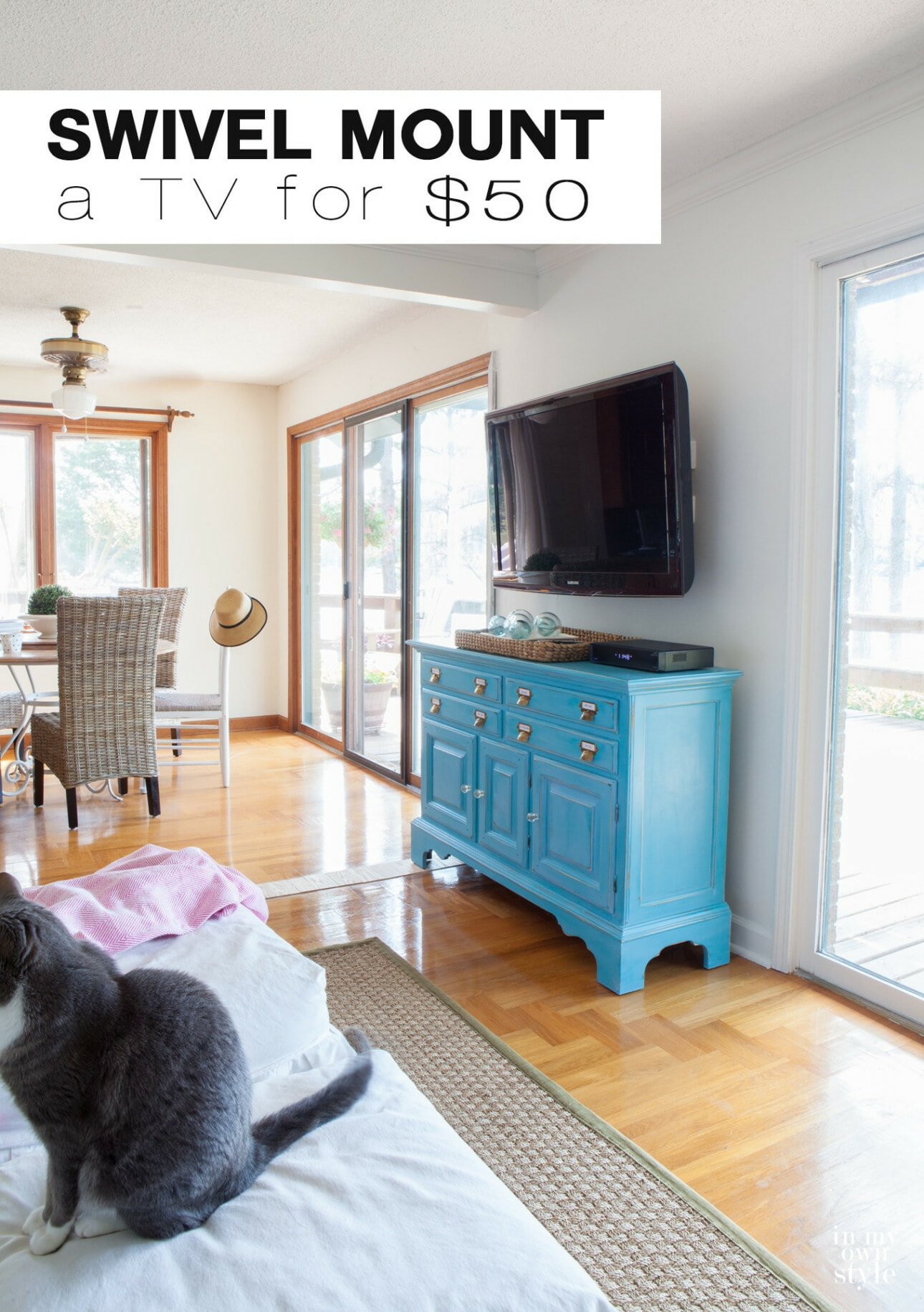 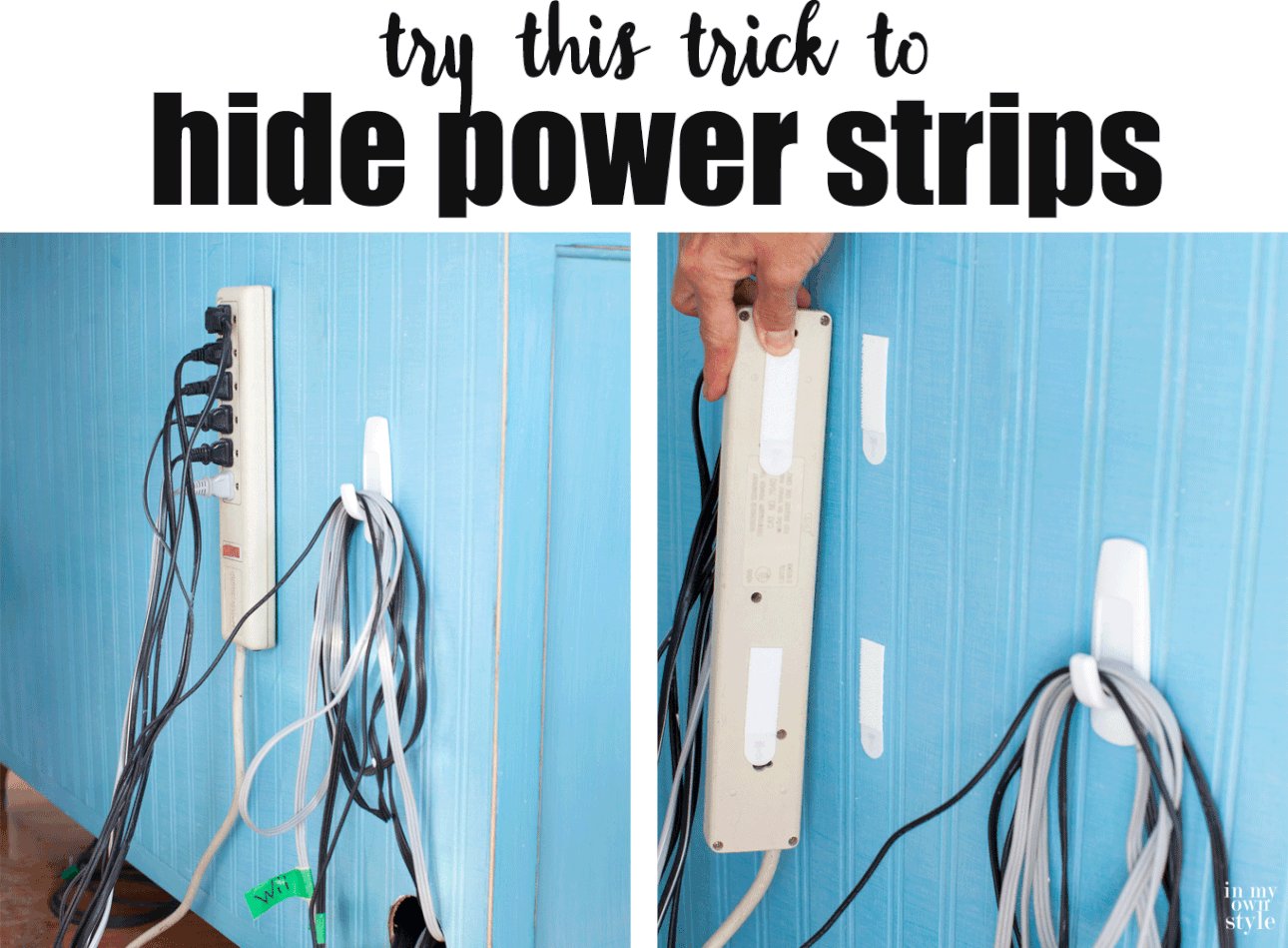