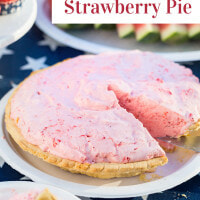 When you are craving something cool, smooth and creamy, but also want something fruity with a little crunch – this No-Bake Mile High Strawberry Whipped Cream Pie will answer those cravings in one sweet mile high bite.

That one sweet bite will not be enough though… You will want a whole slice.

In my post last week about my plans for hosting a Fourth of July picnic, I told you I would share the recipe for the strawberry pie that was in a few of the photos.

This Strawberry Whipped Cream Pie recipe came into my life from one of Ed’s co-workers a few years after we were married. It is my most asked for dessert recipe right after this Picnic Perfect Apple Crisp recipe.

I don’t even need the recipe card to make it anymore since I memorized it years ago after making it so many times.

It is a frozen dessert that I make throughout the year, but works well for a backyard picnic, since each creamy cool bite is refreshing on a hot summer day. I leave it plain, but you can top it with slices of strawberries.

When you bring it out to serve, you will kind of feel like the ice cream man as everyone will come running to get a piece.

When I made the pie a few weeks ago I decided to change things up a bit. I normally bake a frozen pie shell and fill it with the pie filling to make one pie following the recipe below.

Just because the recipe says to make one pie, doesn’t mean you can’t get creative with it. That is what I did.

I decided to experiment by making Strawberry Whipped Cream Pie cupcakes so my guests could simply pick one up from a serving plate, no need to have to wait for a knife to cut a slice. 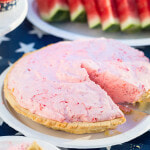 How to Bake Frozen Pie Shell

To make the cupcakes, I followed the pie filling recipe with one exception. Instead of spooning the pie filling into one large pie shell, I removed the pie shell dough from the foil pie pan and let it thaw. Once thawed, I rolled it out with a rolling pin to about 1/8″ thick.

Then I used a wide mouth drinking glass since I didn’t have a large round cookie cutter to cut out circles in the rolled out dough.

I formed the cut circles of dough into cupcake liners, poked with a fork so the dough would bake flat and not bubble up. I baked for 10 minutes until they were a light golden brown.

Once cooled, I spooned the pie filling into each, covered with foil and placed in the freezer.

Try These Other Filling Ideas

If you have a piping bag for adding icing to a cake, it can be used to add the filling to each cupcake to form a swirled mound of filling in each cup that would resemble soft-serve ice cream cones.

Forgo the cupcake liners – instead place the pie filling in ice cream cones and then freeze.

Remove pie or cupcakes from the freezer about 10 minutes before serving so they can soften a little.