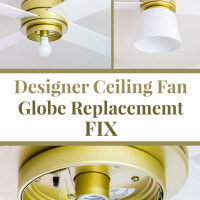 How to replace the globe on a ceiling fan when the original glass globe or a standard ceiling fan globe will not fit.

Back in the spring, when Ed and I were adding white planked ceilings to the guest rooms, we had a slight mishap. At the time, I didn’t think it was anything major, but I soon found out I was wrong. It turned into a months-long quest to find an affordable fix.

See the pretty Hunter – Hepburn ceiling fan? Isn’t she pretty? I have owned the ceiling fan now for a few years. I also added the same fan to my studioffice.

Well… when we were setting up to plank the ceiling in this room, I had my tripod and camera in the room to get BEFORE photos. As we were prepping to remove the fan, I moved my tripod out of the way by picking it up and holding it up high to clear a large box on the floor. When I did that the tripod hit the white glass globe and the globe broke. :-(

Of course I was upset, but figured I would just get a new glass globe at Lowes where they sell universal ceiling glass globe light covers in many styles for around $15.

On further inspection of the ceiling fan though, I realized that none of these common glass globes would fit onto my Hunter fan. :-( Again, no worries, I just had to call Hunter for a replacement globe.

In the time being, since I had the same fan in my studioffice, I used that globe to replace the guest room globe. That left my studioffice without a globe, but I am the only one that goes into the room, so I didn’t mind it for a short time.

When I emailed Hunter, I was told that I could order that globe for $129!!!!!!! What!! That is half the price of the fan! I was then told since I already owned the fan, they would discount it to $75.

No way was I going to pay that much for a single glass globe. I had to do some creative thinking to come up with my own affordable decorative fix.

Over the summer I played around with a few ideas and found one that worked and that I was happy with. It only cost me $12.00.

I know that most of you don’t own this fan, but I decided to share the story and fix with you. I hope that my “out-of-the-box thinking” and resourcefulness using common household items, may inspire you to find your own way to fix or even innovatively decorate your home.

My first idea was to clip a large drum style shade to the light bulb. The lamp shade would have added to the modern lines of the fan, but after trying 3 shades – no go. :-(

So here is my $12.00 fix. It looks like I simply clipped a slant sided lampshade over the bulb, but doing that made the shade hang down way too low exposing the light bulb and bottom of the fan.

This didn’t stop me though from continuing to experiment. I bought a few different sizes and types of lamp shades and the same thing happened or the shades didn’t fit at all.

I tried a few ideas using my array of lighting hardware from light bulb rings, finials and socket extenders, but none worked.

It wasn’t until I reached into my desk drawer for a paper clip that I got an idea using one of the smaller slanted shades I bought to try.

3 large paper clips was all I needed for success! Smaller sized paperclips didn’t work. With trial and error, the large paper clips made hanging the shade from the bottom of the fan a workable solution covering the base and the socket area from view.

I know it seems like, “Why didn’t you just clip the shade to the bulb and be done with it?” This would have be the easy fix, but the shades wire frames were either too tall or short and didn’t seamlessly cover the under side of the shade. As I was experimenting, I should have taken photos, but at the time I didn’t think I would be creating a post about the fan and the broken globe.

This is the view from the back of the room. It is where I placed the seam of the shade. I haven’t cut the wire ring inside yet, but will as it is not needed.

I couldn’t be happier with my paper clip fix for the ceiling fan.

Figuring out how to make a shade work on the fan got me thinking about other common household items like rubber bands, safety pins and more that can be used to fix or make decorative items in your home.

I will post about how I use these items when decorating my house in my next post.

As I mentioned above, you may not even have ceiling fans in your house, but you do have many other items that may need to be repaired or changed in some decorative way. When that happens, remember to keep an open mind and try to envision a way to make it work for your needs. Don’t be afraid to experiment to come up with a unique work around or fix.

Being resourceful can also keep your decorating budget in check. :-)